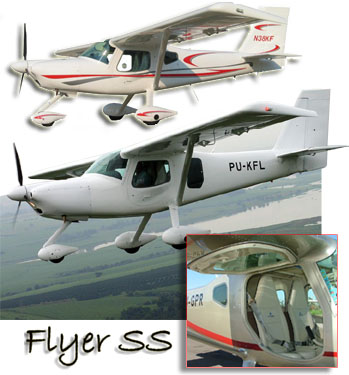 While the aircraft’s fuselage is carbon fiber, wings and tails feathers have a 6061-T6 and 2024-T3 aluminum construction. Wing struts attached to the fuselage aft of the doors helping entry and exit. The cabin is a generous 47 inches. Empty weight is 850 pounds. Read my Sport 600 report.

A Canadian design — the Pelican 700 — was reengineered into a SLSA by an American company — New Kolb Aircraft — and is being manufactured by a Brazilian company — Flyer Industria Aeronautica. Such international collaboration is becoming common. *** Kolb won approval for the Flyer SS in July (#87 on our SLSA List). Leading the SLSA project is Izek Therrien who said, “The master lines [of the Pelican] were kept. The fuselage was then rounded, enlarged and equipped with a new flight control system.” He reported 57 have been sold in South America and that a second Flyer SS will enter the USA in October.” *** Some SPLOG readers may be unfamiliar with the Kolb name, but this 30-year old brand has produced 3,000 of their popular models including the Mark III and the Kolbra. Every one until the Flyer SS has been a kit. Kolb is recalling a veteran name from their history. Flyer was what Homer Kolb called his first ultralight back in 1980. *** The idea of an LSA coming from Brazil should surprise few world-wise pilots. Brazil has a rich aviation history. Flyer Industria is operated by Claudio Goncalves, whom I met many years ago. His company has built more than 1,500 airplanes.