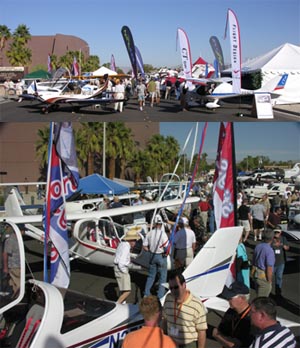 Near the LAMA motorhome display on the Hartford-Brainard Airport, you’ll find these LSA: Sigma; Sportstar; CTsw; G-700S; Jabiru J-250; G-3; StingSport, Breezer, and Skylark; and two Tecnams. Alongside their GA models, Cirrus will show their SRS and CubCrafters their Sport Cub. Neither Cessna Skycatcher nor The Champ are expected to attend.

At Oshkosh I took the chance to speak with several general aviation leaders — CEOs of top general aviation companies and presidents of leading membership organizations. All have been kind to me with their time and generous with their support for the Sport Pilot concept, but I sensed they didn’t yet accept LSA deep down. Minor questions remained. Today that seems convincingly gone. The same not-100%-certain leaders now chorus, “LSA is here to stay.” *** Evidence of that is again marshaling for AOPA’s season-ending event for general aviation. The D.C.-based organization now counts more than 413,000 members, more than two-thirds of all pilots on the FAA register. The traveling Expo show typically draws well from a region’s pilot population. Action starts October 4-6, 2007 at the Hartford-Brainard Airport (HFD). *** For the third year running AOPA is providing a grouped location for Light-Sport Aircraft right where you enter the airplane display area (SLSA exhibitor list under photo). Last year at AOPA’s event in Palm Springs, California, the densest crowds among all aircraft displays were around the LSA fleet.