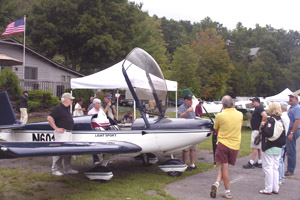 “It’s the only airport in the country,” stated organizer Jim Pellien, “where you can literally walk to a snow ski chair lift, or a golf course, a restaurant, or your condo.” Indeed Sky Bryce airport (VG18) at the Bryce resort in northwestern Virginia is a rare fly-in destination where a rental car isn’t needed. The airport itself is not one of those places you hope to depart quickly for greener pastures. In fact, it’s a beautiful location nestled in a valley. *** Jim organized the Mid-Atlantic Light Sport Aircraft Show for the weekend of September 16-17. Fall colors weren’t showing yet but the event generated a respectable turnout. Available for examination and demo flights: a Czech Aircraft Works 601, Sky Arrow, Allegro, and Airborne XT912. A few other interesting but privately-owned flying machines were also present and an Evektor and CT were expected after this SPLOG was posted. Jim runs an active “immersive” Sport Pilot flight school at Sky Bryce.