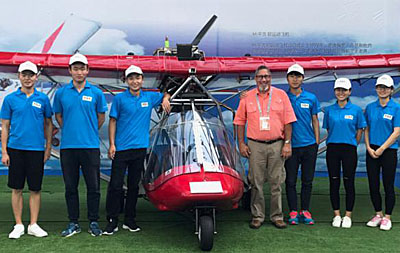 Aided by a group of young Chinese, M-Squared’s Paul Mather poses by one of his Light-Sport Aircraft.

One of the big hopes of the global aviation community — besides the shared wish for more young people to take up flying — is that Chinese interest in aviation grows.

China has convincingly proven it can build vast numbers of bridges, apartments, railways, and all sorts of major infrastructure. Can their people develop an interest in flying? Why might this be important to Americans?

To date, Chinese investors have bought all or portions of big GA companies, such as Cirrus, Mooney, Continental Motors, Glasair, and more. Yet those acquisitions do not start Chinese youth on their way to enjoy flying as Americans and Europeans do today.

Real growth needs to be grassroots.

Chinese leaders have staffed their airlines and their military, but from my own close-up view, the number of Chinese involved with sport or recreational flying is a very small number, microscopic compared to their immense population.

One organization working to change that is Aero Sports Association, run by the tireless, ever-positive Shudong Li a former Chinese national who today lives and works in the San Francisco area. “On May 27, we have good news from Anyang,” ASA reported. “The ‘Anyang International Aviation City,’ development project made significant progress since beginning nine years ago.” ASA refers to the Annual Anyang Aviation Expo, a cultural and tourism event hosted by the city.

I made my own trek to central China, to a welcoming city of more than five million citizens, to attend the same event in 2015. 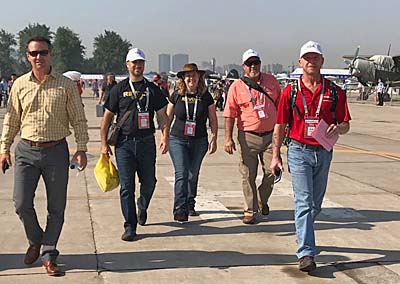 “ASA Exhibition Hall 2017 was a complete success,” expressed Shudong. He was quick to add thanks to Aero Sports Federation of China vice chairman Li Zhengmei and ASFC service company general manager Lei Yin for their care and encouragement. “We look forward to working together in the future to jointly build ASA’s ‘Aviation Vocational and Technical College’ for the future development of China’s aviation industry.”

Shudong has worked long and hard to pave the way for American aircraft producers.

Why Should This Matter to You?

Many American pilots enjoying their pursuit of sport and recreational flying often express little interest in what is happening in China. That’s understandable, perhaps. China is distant and the beginning of personal flying in the country seems far off. However, that may be overlooking a future value.

If American producers of light aircraft want to grow, overseas sales are important. As companies like Apple and many others show, sales in China can significantly aid their bottom line. Interest in American-made products is very strong. 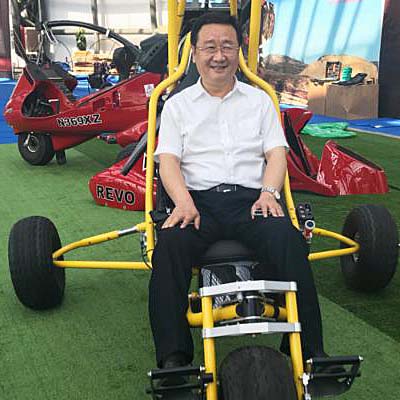 Anyang Mayor Wang Xinwei tries out the Evolution Trikes Revolt. Mr. Wang and others recently visited Florida to learn more about growing aviation in his city.

ASA reported that Anyang leaders “officially signed the first batch of four sports aviation manufacturers, which will be stationed in Anyang this year, in the economic and technological development zone.” Shudong added that Anyang City and ASA have agreed to set up another six overseas sports aviation manufacturers next year. “ASA’s ‘Anyang International Aviation City’ industrial development has laid a solid foundation, and the whole project is ready to go.”

Revo producer Evolution Trikes, basic LSA builder M-Squared, powered parachute leader Powrachute along with powered paraglider manufacturer Blackhawk Paramotors USA made the long trip to Anyang to show their products. For M-Squared and Blackhawk this was at least their second trip

If these companies and more to follow are successful at selling into China one day, that will help their business so they can create new and better aircraft that Americans (and Chinese) can buy.

China may be distant but it could help red-blooded Americans get more of what they want. That seems a good thing, so thanks to ASA and Shudong for their ongoing efforts to crack open this important foreign market.