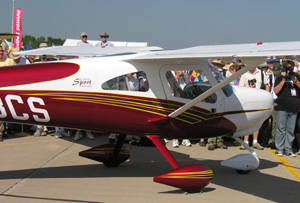 Yes, it’s a Cessna. Yes, it’s a Light-Sport Aircraft. And yes, it’s now out for all to see. Many industry insiders gave the big producer credit for a solid entry…or proposed entry; Cessna officials remain in “study mode” for their newest creation.

Almost first thing on opening day at AirVenture, Cessna lifted the black covering that kept their Proof-of-Concept LSA a secret. The veil is off and now we all know what the world’s largest airplane builder has in mind. Top Cessna officials, including president Jack Pelton, still say they are studying the entry. They’ll make their decision in the first quarter of 2007. Several issues are still being investigated inside the company and they will be surveying visitors at AirVenture to see what they think. *** The big question is…”What’s it look like?” The photo explains much, but what you can’t see is mostly metal construction with limited composite, It has gull-wing doors and significantly, it’s powered by a 100-hp Rotax 912S. The Proof of Concept Cessna LSA had no interior or avionics. If they decide to proceed it will sell for under $100,000. *** Many industry leaders applauded the entry as credible and attractive and many I talked to enthusiastically welcomed Cessna, if for no other reason than the validation it offers to Light-Sport Aircraft.