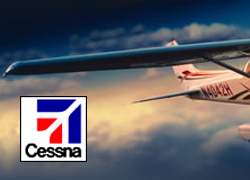 Assuming they go forward with an LSA, will Cessna emulate their familiar shape or create a clean-sheet design? Either way, this adds credibility to the Sport Pilot/Light-Sport Aircraft segment.

Earlier this year at Sebring Cessna officials including boss Jack Pelton made a stealth visit to the LSA Expo (see SPLOG of January 14, 2006). Well, a bizjet hiding among Light-Sport Aircraft wasn’t particularly stealthy but they were apparently serious. Today the rumor mill kicked into overdrive with the big company’s formal announcement that it is “studying the feasibility of developing and producing a Light Sport Aircraft (LSA).” Cessna said they’ll have have a mockup in the LSA Mall at EAA AirVenture Oshkosh 2006 and noted that LSA represents “the highest growth sector of general aviation.” This announcement is both exciting and more than a little scary for current LSA providers. Cessna jumped into the Very Light Jet (VLJ) market with their Mustang, and they are supposedly creating a “Cirrus Killer.” The storied brand is glancing over its shoulder in several aviation markets. Big companies are often less nimble than small players. Cessna indicated they will make their decision about a LSA early in 2007.