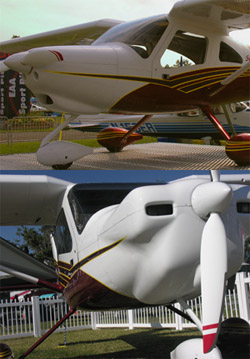 Sun ‘n Fun 2007 brought several interesting announcements; you’ll want to keep reading SPLOG in the days ahead. One surprise was what Cessna did with the Sport, their possible entry into the LSA field. Comments ranged from, “Now, that’s the right engine to use” to “What an ugly cowling” to other vivid expressions. Cessna shoehorned a 100-hp O-200 Continental into their proof-of-concept LSA entry (still with a spartan interior). Well, truthfully, it doesn’t look like much shoehorning happened. Instead, to accommodate the Continental, Sport’s nose cowling now bulges like a weightlifter. The O-200 also adds weight — reportedly “only” 30 pounds when Continental releases their Light Sport engine. That will further squeeze useful load but the Continental engine may satisfy a flock of potential Cessna Sport buyers — when and if the Wichita giant decides to produce it. General aviation still has a legion of folks who don’t like the Rotax 912 series that otherwise dominates light-sport aviation. Maybe they just don’t understand its strengths but Rotax has yet to win the hearts of GA mechanics.