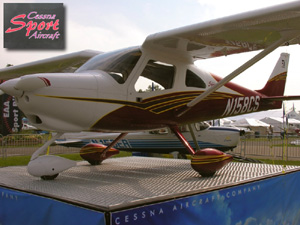 Now it flies! And you can see it up close and personal at the Sebring U.S. Sport Aviation Expo on January 11-14, 2007. Sebring is “the only US event of its size, totally focused on LSA and Sport Pilot!”

Unless you were hiding out in Italian vineyards like I was, you know Cessna flew their LSA on Friday the 13th (no superstition in Wichita, evidently). EAA’s Sport Pilot website has more details (and in-flight photo proof). What you may not know is that the big company will make a marketing splash at Sebring’s LSA Expo. Oh, I’m sure the Cessna LSA entry will also display at the AOPA Palm Springs Expo on Nov. 9-11. But Sebring’s January 2007 Expo is the coming-out party for new and upgraded LSA. So Cessna’s purchase of a booth at the Florida event is significant. *** They are also rumored to be checking out a parachute installation, probably since so many LSA come similarly equipped but it would also gain an extra safety margin for their test pilots. *** I’ll be paying the world’s largest airplane producer a visit in late November. They declined make the LSA available for press flights until a go/no-go decision in early 2007. But I’ll have a further update after my visit