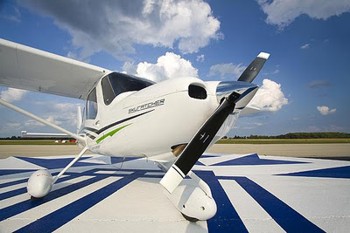 The Sky’s no limit…in greenbacks. 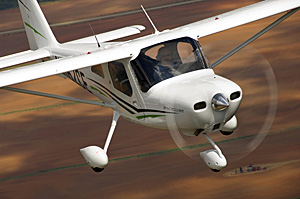 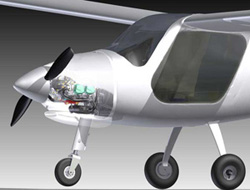 Pipistrel’s new trainer LSA, the Alpha, will make a debut in 2012 at about $80,000. artwork courtesy Pipistrel

In a recent piece on AvWeb, Paul Bertorelli takes a good look at Cessna’s decision to bump the price of the Skycatcher by a cool $35K — yes, that’s 35 thousand. Okay, it’s not every day we see a 31+% price hike in a retail price of anything, especially in this economy. *** Yet Cessna’s move should come as no surprise to anyone who knows, as Bertorelli points out, that the price of aircraft has grown faster than the rate of inflation for decades. Thirty years or so ago, a new Cessna Skyhawk could be had for around $30,000. Today it’s 10 times that number, or more than $300,000, whereas inflation applied to that original $30K number would put the figure just north of $100,000…about three times higher. *** Meanwhile, the aviation giant has up until now done its best to keep the price close to it’s original near-$100,000 level. Most recent raise was from $112,000 to around $114,000. *** Originally announced in 2007, more than 1,000 orders were racked up in short order. *** Then came more than two years of delays — first deliveries were made last year and 150 or so Skycatchers have been delivered this year. *** All along, Cessna tried mightily to hold the line on price increases even in the face of production cost increases: it of course wanted to hold onto that $75 million in orders; wholesale decimation of the Skycatcher order book would have been a heavy hit, even for Big C. *** The company pressed on through at least one major tailfeather redesign to keep the program viable, and keep original placeholders on board with a gradually-climbing price that stayed close to the original ticket of just under $110,000. *** Now the scrappy Skycatcher has climbed the U.S. delivery numbers to its recent, current position of #2. Only longtime leader board-topper Flight Design has registered more LSA in this country. *** How does Cessna’s new $149,900 price compare? Look at the price of equivalent-quality SLSA out there; you’re looking at a typical sticker-shock number of $125-150K*. Big C is only raising its product to market parity, and to help support production costs, after having worked hard at it’s “holding the line” image. Also factored in: many of the instrument options are now standard, so the price increase isn’t baldly wholesale: some perks are factored in. *** Still, those options are no longer voluntary. *** I wonder how deep in the red Cessna went with the delays in production, increased design and retesting costs — the company has proudly, and deservedly, boasted that it took Skycatcher through a program more rigorous than the ASTM standard, including spin testing… that’s how the original design flaw was uncovered in the first place. *** Bertorelli goes on to reflect on the marketing and psychological effect of the price jump, and whether it will cause a bailout of significant numbers of remaining production number holders. He also has some interesting insights on how Cessna has always been good at maintaining its profit margin, even if it meant raising prices and accepting the lower sales numbers that resulted. That’s how companies survive, after all *** It’s a good read, check it out for an insight into how big aviation business cope these days. *** He concludes with a compelling question that deserves more thought and some comment: if Cessna, with it’s offshore Chinese production, can’t produce a relatively “low cost” SLSA, does that put the kibosh on the notion entirely? *** I have my own thoughts, viewed from a slightly different angle: look at my recent post on the Pipistrel Alpha Trainer that was just introduced around $80,000, and that’s not a stripped model either. I read an online forum thread a couple days ago in which several posters flat out decried the $80K price point. “Impossible!” they cried. *** Yet here is a lean, mean, well-oiled design/production house in Slovenia that is showing us the way of the future, perhaps. The company just sold 200 Alpha trainers to India; the production prototype is planned for debut in April. *** I believe the company President, Ivo Boscarol, when he says he will produce the airplane at that price. His vision all along has been that if you do things in a very targeted, innovative and efficient manner, you can produce affordable, quality aircraft that will sell, even with the euro/dollar exchange rate, in the $80K range in America. *** Take another look at what we complain about as a “high cost” light aircraft: adjusted backwards to the before-inflation rate (1975, roughly); we’re looking at $19,000 for the Alpha …had it been available in that year. *** Before we cry in our $7 microbeers, we should lament the destruction of our currency by the craziness of world economics for the last 70 or so years. That is the real culprit. An ounce of gold still buys approximately the same goods it bought in 1950…1920…1900. It’s not that things are more expensive. It’s our currency, no longer backed by gold or silver, that’s taken the hit. *** Why do you think China among other national governments is buying gold like it was on fire sale? Because it is. *** Aviation companies like every other enterprise must find ever-more-efficient ways of surviving, let alone thriving, by continuing to discover how to do the impossible, even if they have to grapple with perceived realities, such as this misplaced notion that there are no cheap light aircraft. *** Put another way, I’ll buy an $80,000, all-composite, well-equipped, good-performing aircraft for $19K any day of the week… even if I have to find a few partners to help me out with the purchase, since my salary also buys a quarter of what it did a generation ago (’75). But that’s another, and unfolding, story. * For the record, not all SLSA cost $125-150,000; we have good quality, airworthy, and good performing aircraft for below $100,000. —DJ