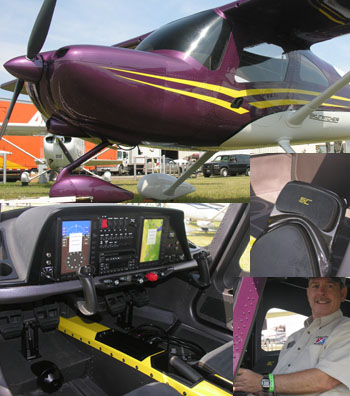 Skycatcher — like the new name? — is seen with the new nose cowl and straight (no longer swept forward wings). Gull wing doors remain but this mock-up has a full, painted interior. A generous baggage area is available behind seats that tilt forward (though I found them a bit short in the backrest). A single glass screen is standard.

In a major ceremony the day before AirVenture Oshkosh opened, Cessna debuted a “full-scale mock-up” of the Skycatcher. And indeed it showed some fresh ideas. But first, the answers to common questions. *** Bowing to the established A&P community the Wichita giant selected a Contintental O-200 100-hp engine. Later they hope the engine will trim 25-30 pounds, an important goal as empty weight came in at 830 pounds. Price was set at $109,500 though Skycatcher comes equipped with a slim, vertically-oriented Garmin G300 PFD/MFD (a second screen is optional); offered exlusively by Cessna. Cabin width is an adequate 44.25 inches, some five inches wider than a C-150 (though less generous than many LSA). *** Innovations include an excellent joystick that routes forward so the floor is unobstructed for entry. Rudder pedals, not seats, adjust (see big black knob at lower left). The flap handle is recessed in a center console. Cessna says the yet-to-fly Skycatcher will cruise up to 118 knots for 470 nm on 24 gallons of fuel. First production is slated for “2nd half 2009.” Cessna started taking deposits, launched by two orders from EAA.