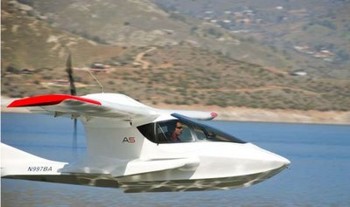 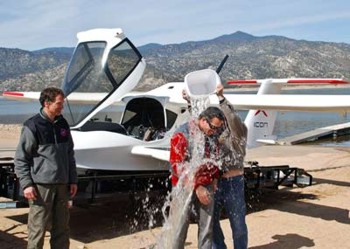 The Icon A5 made a big splash, you should excuse the pun, at last year’s Oshkosh Airventure. The high-profile marketing campaign posits that there’s a whole generation of high-energy recreational enthusiasts looking to own their own flying motorcycle/jet ski, and they’re putting up some hefty investment capital to back up their vision. *** The company took another major step toward finding out whether that vision has legs when ICON Aircraft founder and CEO Kirk Hawkins made his first flight in the prototype on March 11, 2009, as part of the company’s user trials. The flight took place at Lake Isabella in Kern County, CA, site of 45 earlier test hops. *** “I walked into the test flight completely focused on evaluating the aircraft as a potential customer,” said Hawkins. “As an experienced pilot who’s flown everything from ultralights to fighter jets, I expected my reaction to be, ”˜Yep, it flies just like I expected. Good job,’ said Hawkins. “I think my first comment after the ground crew opened the canopy was, “Wow! This thing rocks! I may have just had as much fun flying as I’ve ever had.” *** You can find out more about the ICON A5 and the high profile company behind it here. *** ICON says flight testing of the prototype will continue through 2009 with deliveries targeted for late 2010.