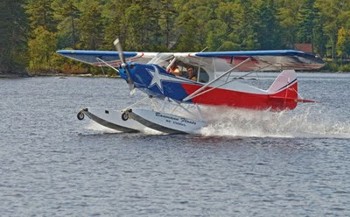 American Legend, makers of the popular fun flivver Legend Cub SLSA and Texas Sport kit version, aren’t letting any bad-economy moss grow under their Cub-yellow tennies. *** First, the top-selling American LSA maker received ASTM certification and has completed versions available as we speak for its Amphibious Float Cub. *** The web-footed little bear is based on a lightweight version of the Cub. Baumann Floats makes the water gear. *** A couple of FloatCub’s advantages over other Cubs and seaplanes are the both-side doors for ease of docking, and an electric starter – no more shaky dockside hand-propping ops! *** Cost complete is $159,000. *** Next, Legend’s “Cash For Junkers” rebate program is still going strong. The company kicks back $4,500 after purchase of a new Cub or kit. To get the rebate, just trade-in your old moth-eaten bird, flying or not. *** BTW, the “Junkers” reference pays homage to the German Junkers & Co. that built some infamous airplanes, including the JU-87 Stuka dive bomber. *** Finally, for Christmas Cubbie shopping fun, check out the online store. Lots of goodies there for Cub lovers, and who doesn’t love Cubs? *** —photo courtesy Legend Aero