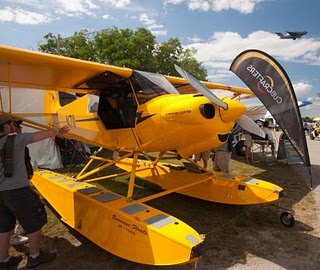 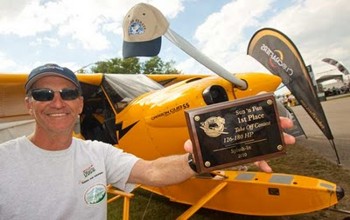 Every year at Sun ‘n Fun the nearby Fantasy of Flight Museum puts on a Splash-In.  Aircraft of the waterfowl persuasion, from amphibians to seaplanes to float versions of GA, Experimental and LSA types hang out and participate in some fun contests, including spot landing, grapefruit bomb drop and…short water takeoff. *** The last task is arguably the most visually exciting for its demonstration of sheer power-to-weight performance and other factors. *** Enter Goliath: Phil Lockwood’s legendary AirCam, a heavily modified ultralight Drifter with two engines that’s legendary for it’s short takeoff mojo on land and water.  It can get airborne on one engine and climb at 200-300 fpm.  Oh – and did I say that’s off the water? *** Enter the challenger: Although the AirCam generally competes in the above 200hp category, and the Carbon Cub has 180hp, the CubCrafters gang thought it would be fun to do. *** The airplane’s owner, Gary Lickle, had a grand total of 9 hours on floats, having just finished his float rating the week before. *** “We thought it would be fun to see how we could do against them.  We never expected to win, so it was great fun and a surprise to beat them.” *** Check out this video from CubCrafters and you’ll get the full picture.