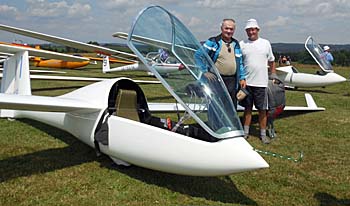 all photos courtesy of Radek Hucik

Sailplanes line up for launch in the usual pattern of such events. The tidy assembly permits the fastest towing of gliders so that all gain the benefit of good soaring conditions. Saggita appears closest to the camera.

For your weekend enjoyment — and because I am a soaring enthusiast … plus I was sent some interesting photos — consider this slick Part 103 glider, or motorglider (photo). Radek Hucik sent photos of the aircraft performing at a Czech soaring content, where it placed 12th out of 34 competitors. Considering most of the others appear to be conventional sailplanes, one that meets Part 103 at much less weight did well. A high end sailplane can hit or exceed a 50:1 glide angle. This is an amazing performance mark, which translates to flying nearly ten miles from only 1,000 feet of altitude. The XS-12 Saggita manages 35:1 (more specs below) and that is a noteworthy achievement for such a light aircraft. Radek wrote, “[This is] a powered glider that my colleagues and I have developed over the past 20 months. The glider is designed so that it meets Federal Aviation Regulations Part 103 [for] Ultralight Vehicles. As the photos show, Saggita can be powered or unpowered. A self-launching sailplane has some independence that an unpowered glider does not have. Normally they are air towed in the USA and often winch towed in Europe.

Radek continued, “I have been involved in designing and building composite fuselages and other parts for various ultralight aircraft for over 20 years. I have built the motorized glider Sagitta with my colleague Vadimir Duchacek. Static and flight tests were performed by LAA inspector Milos Dedera, one of the best glider pilots in the Czech Republic. The glider exhibits stable behavior even at a stall speed of 45 km/h (28 mph), and the rudder is effective at this speed.” Radek later added, “To safely meet the stall speed of 24 knots (45 km/h or 28 mph) at maximum takeoff weight of 230 kilograms (507 pounds) span will be increased to 12 meters (39 feet), wing area to 9 square meters (97 square feet).” Landing speed is 50 km/h (31 mph) without flaps reports Radek and descent speed at 90 km/h 56 mph) is 0.6 m/s (a 140 foot per minute sink rate). To learn more about this Part 103 glider / motorglider, contact Radek by email.

Saggita’s tail wheel is built into the rudder. With a mounted wheel near the winglet, the aircraft will be able to taxi around an airfield from hangar to runway and execute turns with a radius of six meters (less than 20 feet). “The engine can be fastened in front of the vertical tail area and aerodynamically shielded to achieve the least resistance,” said Radek. Alternatively an engine can be configured to emerge or be hidden in the fuselage. “Our effort to build a clean aerodynamic aircraft is also motivated by the possibility to adopt electric power,” he added. “This aircraft should reach its maximum flying performance with low energy consumption” … the holy grail of the electric aircraft movement today. Following are additional specifications for Saggita: