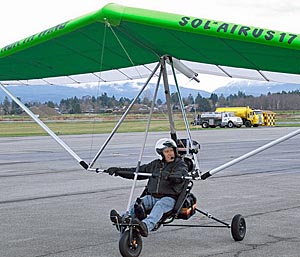 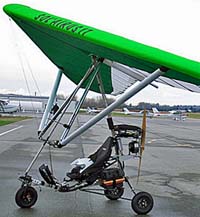 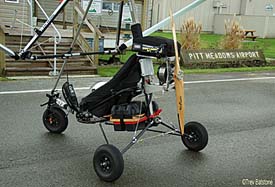 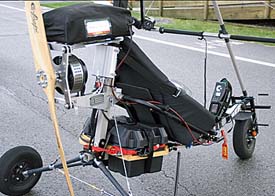 Batteries on “Green 1” offer an hour’s flight, more than enough to get a soaring pilot to thermal altitude. Rauck plans a charging station at his airpark, so pilots can swap batteries and continue flying. photo by Trevor Batstone

From the land of sky-blue waters comes … no, not a beverage but Canada’s first electric ultralight. And sky-blue waters aren’t the point; instead, it’s all about blue skies and getting up to them for a bit of soaring fun. Thanks to my journalist friend Russ Niles, Editor-in-Chief of AvWeb (one of my favorite aviation websites), I heard about a Canadian friend who’s done some interesting development work. Given the general excitement about electric power and my personal interest in soaring flight, I called up my old friend.

Like many of us who enjoy soaring hang gliders, developer Randy Rauck said, “I always wanted to apply electric to a lightweight trike so we could quickly and easily fly our hang gliders up to where the thermals abound.” When he’s not creating a new powerplant Randy runs the Freedom Flight Park in Lumby, BC Canada. “I wanted to try electric to get away from the vibration of a lightweight two-stroke gasoline engine. Those engines demand more maintenance, make noise, cause pollution … and I just thought electric could be better in every way,” he explained.

Photographer Trevor Batstone wrote, “On December 8, 2012 [we saw] the inaugural flight of C-IYUP, the first electric-powered ultralight in Canada. Randy Rauck, pilot and owner, lifted the wheels of the ground for the first time, completing two flights here at CYPK in Pitt Meadows, BC.” Dubbed “Green 1” the light trike was built by eUP Aviation Inc., in collaboration with American trike and wing producer North Wing, whose owner Kamron Blevins agreed that Randy could use one of his trikes and the new Solairus (video) wing. “Kamron said he’d been thinking about electric power but lacked the time, so we got together on this,” said Randy.

Randy’s main enterprise is running an active hang gliding flight park and his Raven Aviation enterprise. At this he is eminently qualified with a long history. In addition Randy worked with Darrell Murphy on projects like the biplane Renegade plus the metal monoplane Maverick and other Murphy powered aircraft.

Developed in association with John McClintock under the name eUP Aviation, Green 1 is powered by a 84 volt, 19 KW hours, or 26-hp electric motor fueled by a one-hour duration battery pack. In test flights it has climbed 600 feet per minute making the effort to reach an altitude where thermals can be found and exploited no more than a 3-5 minute flight. Of course it all happens with very low noise that Randy says makes for improved neighbor relations. “We do plan to sell the package but we’re still working out pricing and supply. We’ve agreed to collaborate with Kamron and North Wing. They’ll supply the trike and wing and we’ll do the electric system.” He notes electric motor parts are sourced from Europe and Asia. No details have been confirmed at this writing about North Wing handling U.S. sales but all are excited about early results and intend to keep forging ahead. “We may come to Sun ‘n Fun 2013 and by then we may have details worked out more fully,” finished Rauck.Below you can see eUP’s wing-mounted video: