Boeing’s gigantic assembly plant in Arlington, Washington. The 747 building (not pictured) is a cavernous clear-span structure. 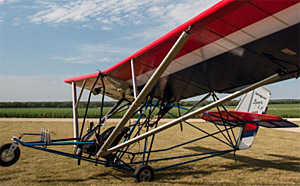 Quicksilver kits can be built in well under 100 hours, much faster by someone with experience, thanks to some of the kit industry’s finest assembly manuals. photo by James Lawrence

I once saw Boeing employees racing around furiously to build an entire 747 in just seven minutes. Pretty amazing, huh? I’ll bet you didn’t know they were so efficient. OK, fine … spoil my fun by telling me that is baloney and simply a “Hollywood effect.” Yes, the truth is, all I refer to is a video watched by every visitor to the Washington State 747 assembly building (by the way, not far from the Arlington airshow every July and a most worthwhile visit). I thought the professionally produced video was terribly cool, as was a tour of Boeing’s astoundingly-enormous building … so immense that several 747s could be assembled at once in a clear-span structure.

So, how about the same idea down here in the world of airplane the rest of us can buy and fly … at least after we build the airplane? I was recently sent such a video from the new owners of Quicksilver Aeronautics. The short — less than three minute — video shows a small team of Quicksilver folks building a Quicksilver Sport 2S wing in preparation for their testing as the company moves from selling kits to offering fully built Special Light-Sport Aircraft. The company will hold a press conference at Sun ‘n Fun in a couple weeks and will update reporters on their progress to this goal. After shipping an amazing 15,000 kits over the years (twice as many as Van’s Aircraft!), two SLSA models will be their first fully-built offerings since the Primary Category GT500 in the early 1990s. For those decrying the high cost of SLSA, here comes one everyman can afford though no pricing been announced by the Southern California company.

In the following fast-time video, you see lots of fun things: builders referring to the manual (for which Quicksilver has long gotten high marks), measuring carefully before mounting parts, taking the process step-by-step as the sun can be seen moving across the floor. Slow motion films are fun but so is something like this. If you’re anything like me, you should find the video below very enjoyable. Thanks to Quicksilver Aeronautics and engineer/budding film producer, Inés Hernández for sending the video along. Of course, it’s also available to YouTube website fans. You can see lots more about Quicksilver Aeronautics products on their redesigned website.

(Note that this is not a professional video and the company promised more and better in the future.)