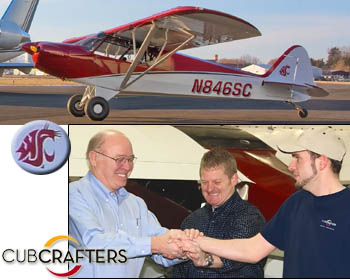 Who in the Light-Sport Aircraft business wouldn’t like to log a sale to the President and CEO of Boeing Commercial Airplanes? CubCrafters made such a delivery yesterday when they presented a special Sport Cub S2 to Scott Carson. The 34-year Boeing veteran makes the big planes by day and can now fly his Light-Sport Aircraft on the weekends. He’ll also fly the colors of his alma mater of Washington State University (photo). To pick up his S2 Carson returned to Yakima where he grew up in the late 1940s. His dad worked for Lamson Aircraft, builder of the Air Tractor, a biplane crop duster. Carson’s father later joined Boeing as a test pilot. *** Todd Simmons of CubCrafters observed that his company and Boeing are the only two aircraft builders in Washington with a production certificate. “We’re Washington’s ‘other airplane manufacturer’,” Todd said. The Sport Cub builder offers two all-new, FAA-certified, ready-to-fly aircraft: the second generation Sport Cub S2 and Top Cub. The latter is built under Part 23 rules and includes an FAA Production Certificate. In 2007, CubCrafters reported producing a combined-model total of nearly 100 new aircraft; Sport Cub tripled its numbers and lifted the Washington producer to number five in LSA market share.