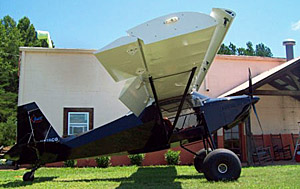 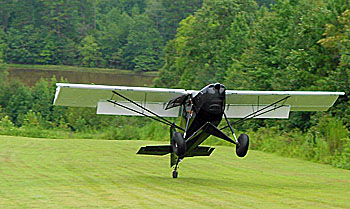 This is the look that amazes everyone (and the airplane seems to love doing so). Two-section wing slats and Fowler flaps produce a stall speed of 28 knots and launches in as little as 150 feet. Watch our current video and look for a flying update soon. 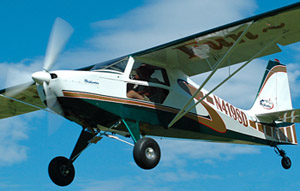 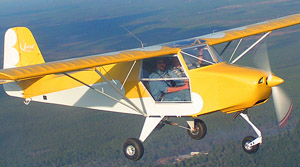 Escapade has trigear for those not ready for a taildragger. The company has sold more than 400 kits since 2002.

By all accounts — and none to the contrary (that I personally heard) — the “new and improved” Paradise City was an out-of-the-ballpark home run hit. On the final day of Sun ‘n Fun 2013, John “Lites” Leenhouts gave his closing review. He noted attendance was up somewhat on Tuesday through Thursday and down a bit on other days, but he highlighted the great success that was Paradise City, the new permanent home of the LSA Mall. The area was chock full of exhibitors, up almost double from last year. Flying went on all day long as predicted, even during the main airshow. Twice I flew in on aircraft I was evaluating while watching aerobatic aircraft twist and turn over the main runway. I know of no accidents or incidents so major kudos to the 186-person-strong volunteer staff under area chairman Dave Piper’s direction. They dealt with many new changes and nearly every detail appeared to go as planned.

Many aircraft provided dozens of demo flights for prospective customers and other interested parties. In his closing remarks, Lites noted more than 600 operations (a takeoff or landing) from the Paradise City runway on the day prior; it must have run into several thousand for the week. An exotic mix of airplanes was smoothly handled with rotorcraft (both gyros and light helicopters), fixed wing, trikes, and motorgliders flying at the same time, without any apparent conflicts. Powered parachutes, paragliders, genuine Part 103 ultralights, and electric powered aircraft primarily flew during the morning and evening when winds were less active. Read an independent report in the Lakeland Ledger newspaper by journalist Jeremy Maready

Among the most active aircraft was the Highlander SuperSTOL from Just Aircraft. Company leader Troy Woodland kept his distinctive aircraft flying nearly all day every day and he wowed the crowd with the aircraft’s extraordinary takeoffs and landings. Hitching a ride was challenging as media reporters and prospective customers clamored for an experience aboard the unusual machine. I finally got my opportunity toward the end of the week and you’ll be able to go along as we strapped video cameras all over the aircraft … two in the cockpit, one on the wing strut, and a unique view from the tailwheel looking forward. Troy and I flew (yes, while the main airshow was smoking up the sky over Sun ‘n Fun’s main runway) and we did seven landings, mostly at nearby South Lakeland Airpark. The aircraft leaps off the ground as its automatically deploying two-section slats move forward at liftoff angle of attack. What is truly amazing is the landings. My senses seemed to be lying to me as we approached so steeply and slowly, the sensation felt closer to that of a helicopter.

As we approached the long turf runway at South Lakeland, Troy established a high rate of descent with the stick fully aft — as far back as it could go, where it remained through touchdown. I felt I could walk as fast as we were moving across the ground just before the tailwheel first touched terra firma (it isn’t truly walking speed, but it is very slow, perhaps no more than 25-30 mph). The large tires and the 20-inch stroke oleo strut handled every landing without the slightest rebound. A tailwheel with its own shock absorber helps (wait until you can see all this on the video!). Meanwhile, SuperSTOL behaves cooperatively with great roll authority down to 30 mph. It showed no tendency to drop a wing; clearly the articulating slats and huge elephant ear Fowler flaps make the short chord work exceptionally hard. On each takeoff Troy pushed on full power from the 100-hp Rotax 912 and moved the joystick to the instrument panel. The tail came up very quickly thanks to large tail surfaces. At level attitude, he relaxed the joystick and pulled on a bit more than one notch of flaps (while holding in the detent button). This causes the retracted slats to move forward and off we went. After accelerating on climbout the slats retract and we cruised around the pattern at about 90 mph. Smaller tires can be fitted without losing the fantastic shock absorbing effect and you can then see about a 100 mph cruise, Troy indicated. Here’s perhaps the best part of all: While SuperSTOL looks gnarly and extreme sitting on the ground, it is a complete pussycat in the air, willingly doing the pilot’s bidding and exhibiting uniformly gentle flight characteristics. A hearty congratulations to Troy and his team including partner Gary Schmitt.