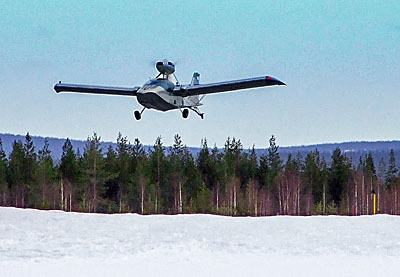 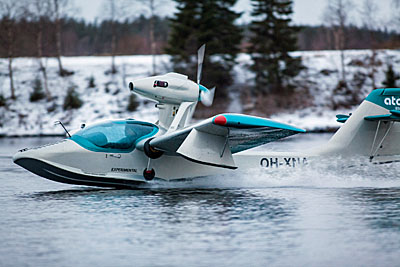 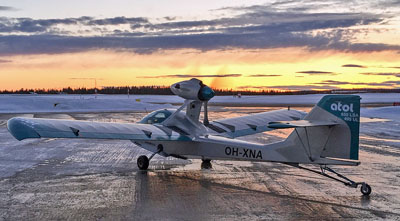 Preparing for flight at dawn near the Arctic Circle. 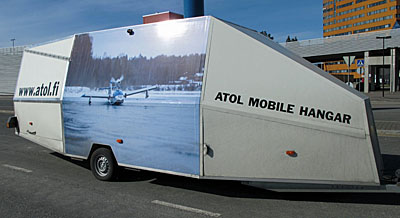 Packed in the Atol Mobile Hangar, the team begins the drive to the Aero show in southern Germany.

“This was my best birthday present. All went well with no surprises,” reported an excited Anssi Rekual, sales manager and front man for the Finland-based builder of the LSA seaplane called Atol. An airline pilot today, Anssi added, “I have only one year to go with Finnair and then I can focus fully on Atol.”

The head of design and company CEO, Markku Koivurova flew for 26 minutes and reported that aircraft was easy and convenient to fly and everything worked normally. Approach to stall and slow flight characteristics were tested on Atol registered in Finland as OH-XNA followed by a perfect landing. Markku flew at Rovaniemi international airport (EFRO) at the Arctic Circle.

Speaking on behalf of the Atol team, Anssi was relating news that the reborn Atol took its maiden flight on Tuesday, April 9, 2015, just in time for the company to have significant bragging rights at the German Aero Friedrichshafen show set to open in two more days. I am already present at the convention hall attending ASTM meetings that occur before the show opens.

Congratulations to Anssi and his team from Atol Aviation, Ltd.!

I use the term “reborn” because Atol is not a new design, unlike several other exiting new LSA seaplanes in various stages of development. In 1984, designer Markku Koivurova started development of Atol, then a wood composite amphibious aircraft. The original model’s first flight happened 27 years ago in August of 1988 in Rovaniemi, Finland. The first flight on water was achieved a few months later off nearby Lake Norvajärvi on October 20th.

Martekno Finland, Ltd., began production of the original model in 1990 and the first deliveries were made in 1991.

Leap forward twenty years to 2011, Atol AvionAtol Avion, Ltd., was established. Anssi explained, “I contacted Markku then and talked him into restarting the business. It took four years to complete the design changes, build a prototype and redo all drawings after completing fresh calculations needed for certificates.” He explained that Atol Avion is a small group with modest funding. “We have on average three hired staff and mostly just our own savings to use.”

The refreshed group began building a new prototype with a longer fuselage and numerous other changes. “The manufacturing technology of the structure and systems and the level of aircraft finish has been further improved,” Anssi related. “Design of the engine cowling and fuselage extension has been refined. The nose, canopy and upper fuselage are redesigned for optimal aerodynamics and to reduce twirling in the tail.” Admirably, and despite all the recent changes made to the refreshed design, Atol Avion promised to continue to support Atol aircraft manufactured by the first Martekno organization.

That pioneering Atol model was and is sold in Europe as a ultralight or microlight kit with a gross weight of 495 kilograms or 1,090 pounds. Now conforming to the ASTM standards using the 1,430 pound (650 kg) weight for seaplanes, Anssi said, “Our Atol 650 LSA is converted from Markku’s original by extending the fuselage by a meter and redesigning cockpit area and engine installation. Basic material is still wood composite but fibers, including carbon fiber, has been used also and all details have been updated.”

Find a full description and specifications for the revised and upgraded Atol here.

Atol Avion reports that they have also sold three planes and will deliver those to clients this summer. “We have also confirmed a financial program that enables us to now totally focus on assembly,” Anssi wrote. Tapping into modern social media methods, he continued, “We are opening a crowdfunding process to finance our production, so all aviators and wannabes can buy a share or two of Atol Avion, Ltd.” He said the company will add more about the fund raising effort on their homepage soon!

Just in time for popular European show, Anssi communicated, “We got our first Atol Mobile Hangar trailer and are packing the aircraft in it and will soon begin our trip to Friedrichafen!”

Ever the gentleman, Anssi asked to give credit where due. “Our technical office team is composed of two Bachelors of Science degree holders with majors in aeronautical engineering plus two students. They made huge progress with certifications and establishing connections with EASA, FAA and Trafi (Finnish aviation authorities). We have been lucky to also have a group of great aviators who have given their expertise and knowledge without compensation” He was quick to add, “Not to forget two great ladies, Sinikka Koivurova and Pia Rekula have backed us and allowed all late nights to be spent to finish Atol 650.”

Atol 650 is presently en route to Friedrichafen, Germany in the far south border of the country where visitors can see the freshly flown aircraft.