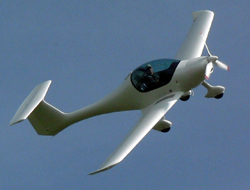 Common to many European LSA production facilities is a background in building highly efficient sailplanes. You can easily see this in the wonderful curves of the mostly carbon fiber Faeta.

You may know its sibling, the Zephyr, which was present at last year’s LSA Mall at AirVenture Oshkosh. Some 90 Zephyrs are flying, mostly around Europe. But the Czech producer’s U.S. importer, Atec Aircraft, went forward with certifying the Faeta (pronounced “Fay-eht-ah”) winning their approval in early June. Atec America’s Caleb Wood reported, “It was a challenging process because the documentation we had to use was in Czech language and had to be translated to English.” In addition, he said, the documents were in a different format with a different method of organization than FAA wanted. But ultimately the data was judged sufficient and now this very shapely design is available to Americans. Caleb and his Faeta will be at EAA’s LSA Mall if he can secure exhibit space elsewhere. *** SLSA number 35 for the Apollo Delta Jet trike represents the number 4 Weight-Shift Control LSA. Welcome to both new arrivals!