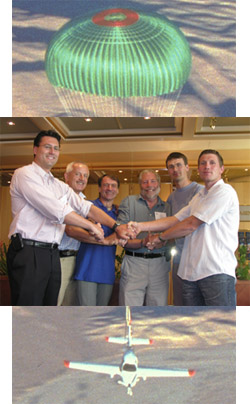 Competing leaders from both sides of the Atlantic shake hands. Shown from left to right are Frank Hoffmann of BRS, Milan Babovka and Vit Hrusa of Galaxy, Gregg Ellsworth of BRS, Milos Straka and Petr Straka of Stratos O7 (known to consumers as Magnum).

Since 2002 when the F37 Light-Sport Aircraft Committee was formed to write standards used to certify these new aircraft, competitors have sat shoulder to shoulder in meetings. Though pursuing the same customer base, these businesses cooperated in a model closely watched by the general aviation industry, the FAA, and many foreign regulators. They’ve done admirably well. International standards association ASTM holds F37 up as a shining example of the process working well, and fast, in a volunteer environment. *** At the first European gathering of F37, one remarkable group convened. All three producers of ballistically-deployed emergency parachutes met face-to-face for the first time. More importantly, they came to agreement on changes to the standard for emergency safety ‘chutes for LSA Such coming together of true industry experts is precisely what FAA hoped for from the beginning. Three companies met in Prague, Czech Republic — a location intended to invite greater European involvement as so many LSA come from the region and this country: BRS Parachutes, Galaxy High Technology, and Stratos 07.