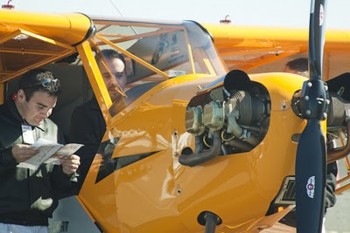 Should hours logged with a CFI-S count toward the Private — and beyond?

There’s been some controversy lately regarding FAA’s mandate that flight training towards the Sport Pilot license is not allowed to count toward the Private Pilot (PPL) and higher licenses and ratings unless the instructor is a certificated CFI, rather than a CFI-S (as FAA delineates Sport Pilot-only instructors). *** Recently, AOPA petitioned the FAA to change the regulations and allow those hours to count for all higher levels of certificated airmanship. *** The pilot member organization picked up support along the way from EAA, GAMA (General Aviation Manufacturers Association), and NAFI (National Association of Flight Instructors), all of which are now petitioning FAA to change these regs: FAR Part 61.99 and 61.109.  The specific language asks FAA to “permit the instruction time received in pursuit of a sport pilot certificate to be credited toward the instruction requirements of additional certificates and ratings.” *** Of course, getting advanced ratings requires training from a qualified CFI. The petition only addresses Sport Pilot training as given by a CFI-S. *** The crux seems to be FAA’s 2009 ruling reinterpretation that revised its own 2002 take that held ultralight flight time logged by Sport Pilots would count toward higher-level certificates.  *** The 2009 statement posited that allowing CFI-S training to count toward the PPL in effect constituted permission for CFI-S to provide training for the PPL. *** No way, said AOPA, proclaiming that aeronautical experience gained in pursuit of the SPL provides “a valuable foundation for the additional requirements of the private pilot certificate.” *** Nobody’s suggesting that CFI-S can legally take a student through the PPL. Buy why shouldn’t the skills taught by one count? *** Does any pilot logically believe that good instruction doesn’t make them a better pilot from Day One? *** FAA’s narrow view is akin to making a student retake 7th grade algebra before he takes geometry in the 9th grade, because he was taught by middle school instructors instead of in high school.  *** Math is math and teaching is teaching.  *** Aeronautical skills and knowledge, as with riding a bicycle, don’t simply evaporate because they were initially learned from someone with a CFI-S-only credential. *** The group goes on to say allowing sport pilots to move smoothly up to higher-level licenses and ratings not only doesn’t compromise safety, but gives Sport Pilots greater incentive to pursue those skills and in fact enhances safety. *** Works for me. What do you think?