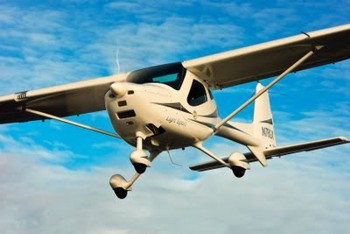 AOPA kicked off its annual Aviation Summit, in Tampa, FL this year, with a pretty cool announcement: it’s annual Sweepstakes Giveaway aircraft will be an LSA: the Remos GX. *** The news here is this is the very first time the pilot’s membership organization has made their big prize a Light Sport airplane. *** Remos is serious about becoming top dog in the LSA sales race as it continues to heavily promote its aircraft and support services far and wide. Although still #4 in overall U.S. LSA sales, Remos aircraft have been selling at a faster clip than any other manufacturer the last year or so. *** Meanwhile, AOPA Prez Craig Fuller, Remos Mng. Dir. Corvin Huber, and our pal, LAMA Pres. Dan Johnson led the unveiling of the Remos before the attendees at Tampa’s Convention Center this morning. *** “Fun to Fly” is the theme of the sweepstakes. The winner will be announced at next year’s summit in Long Beach, CA and should be a happy puppy: the Remos GX will include a ballistic parachute and air bags, Dynon MFD and autopilot, a panel-mount Garmin 496, leather seats and other upgrades to be announced down the road. *** —photo courtesy Remos