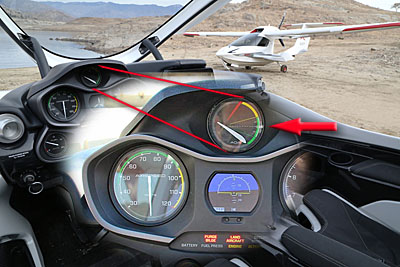 Icon A5’s use of an Angle of Attack indicator is the best implementation I have used. 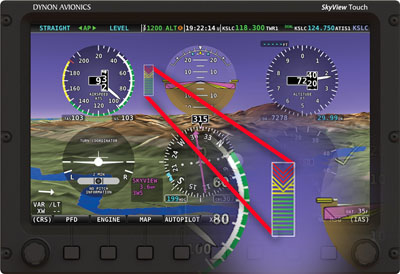 Dynon’s SkyView digital instrument has Angle of Attack built in (with a minimal investment in hardware). 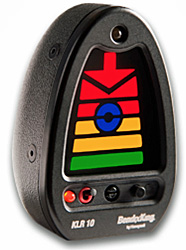 Bendix calls their AoA a Lift Reserve indicator, but I don’t find it as intuitive as Icon’s version. 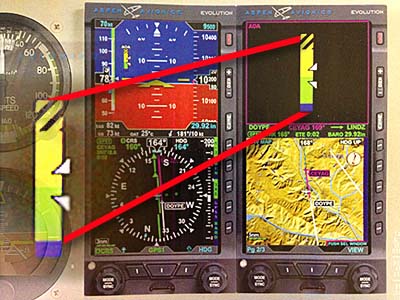 Advanced Flight Systems also offers a digital version of AoA. Do you think you know how to use it properly?

Back in early 2014, Flying magazine online wrote, “There’s an old saying among pilots that ‘airspeed equals life.’ In other words, keep your speed up, and you’ll avoid stalling the wing during critical phases of flight, such as the base-to-final turn. But, that’s a misnomer since the stalling airspeed of a wing will change based on aircraft weight and load factor.”

FAA certainly caught the fever, proclaiming statements similar to this one: “Inadvertent stalls are implicated in almost half of the GA approach and descent accidents.” The implication is that AoA will cure this deathly problem.

Advanced Flight Systems was quoted as saying, “Nearly one-half of Experimental and over one-fourth of certified aircraft fatalities are the result of stalls and spins. The killer-turn from base to final is the leading culprit.”

Wow! You better get an AoA as soon as possible, right? Not so fast.

John Zimmerman, writing on AirFactsJournal.com back in 2013 (whole article here), took a more thoughtful approach to all the AoA buzz. While I see the value of AoA, I thought John summarized the situation well.

He wrote, “Icon’s new AoA instrument (photo) is nice, but it won’t magically make pilots safer. I think that’s hopelessly naive.” John added, “Pilots have to look at the instrument for it to be of any use. In the Asiana 214 crash in San Francisco, the crew managed to ignore the airspeed indicator for a long time, even as it eventually showed them being almost 30 knots slow. Another instrument wouldn’t have prevented this disaster.”

In his article, John referred to the breathless campaigns proclaiming the life-saving potential of AoA instruments. Since loss of control is indeed the number one cause of general aviation accidents, the AoA revolution could be the most important safety innovation in our lifetime, we heard. FAA declared affordable AoA instruments one of its most-wanted safety improvements and AOPA’s Air Safety Institute has enthusiastically supported the cause. However, enthusiasm and federal pressure cannot solve all problems.

“Besides looking at the instrument, pilots have to know how to react to its indications,” John explained. “For the [sport] pilot struggling to log 25 hours in a year, the physical stick and rudder skills may be more important than the recognition skills.”

“Here’s the simple fact that most AoA proponents know, but don’t like to admit: airspeed is a great proxy for AoA most of the time,” continued John. “[Sport] pilots fly in a very small envelope: +/- 10 degrees in pitch and 30 degrees of bank in most cases. Within those boundaries, monitoring airspeed is a perfectly good way to keep from stalling. If you’re doing aerobatics or flying a jet at FL410, an AoA instrument may be essential; in the pattern in a [light plane] it’s not going to tell you much more than the airspeed indicator.”

While I think John makes some excellent points, AoAs do appear to coming to our cockpits. In fact, any Dynon (and other digital instrument brands) already has AoA capability.

My own observation, though actual use, is that AoA indicators require training and acclimatization like any other cockpit instrument. As wonderful as I now find computer screens from SkyView to G3X to an iPad, all took some familiarization. Even that’s not right. I spend hours studying and practicing before I truly began to see all the potential of a glass panel. AoA strikes me as more of the same, albeit somewhat simpler.

I’ve flown quite a few hours with SkyView and for the most part, I ignore the AoA indicator. Airspeed is what I’m most familiar with and on which I primarily rely — that, and plain old seat of the pants flying where I use my senses to avoid getting too slow.

At the Copperstate show last fall, I flew with John McBean in his Kitfox equipped with AoA. He was very familiar with it and used it. I tried with John’s encouragement. Yet seeing my sluggishness at interpreting it, John referred me back to airspeed.

This summer when I flew Icon’s A5 (video pilot report), I found their portrayal of AoA far and away the best. I could actually use it and did so soon after takeoff — admittedly with encouragement and advice from my ex-military demo pilot Craig Bowers — nonetheless, I found it quite useful.