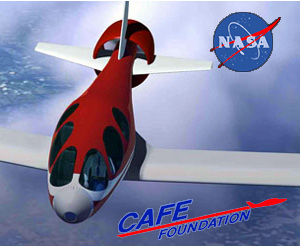 The National Aeronautics and Space Administration (NASA) has teamed up with Comparative Aircraft Flight Efficiency (CAFE) to host a flight competition for small aircraft that pays a Quarter of a Million Dollars.

In 2005, NASA teamed up with the CAFE Foundation (best known for flight testing aircraft for EAA) to host the Personal Air Vehicle Centennial Challenge (PAV CC), a $250,000 annual flight competition for small aircraft . “PAV CC is modeled after the ‘X Prize’ and embodies NASA’s commitment to the first ‘A’ in NASA: Aeronautics,” explained CAFE president Brien Seeley. As prizes in aviation go, this is the Big One, stepping up each year to over half a million bucks by 2011. “The big news is that the competition is open to LSA,” Brien added. PAVs are defined as “small but highly capable aircraft with 2-6 seats that are suitable for on-demand travel on trips of up to 800 miles.” LSA qualify and, except for our speed limitation, could fare quite well in several categories of judging. One requirement is, “Able to be flown by anyone with a driver’s license” and LSA certainly have a big edge. Interested in entering the competition? Check out CAFE’s PAV website and send your Notice of Interest Letter. A quarter mill awaits your success. The first competition will be held August 4-12, 2007 in Santa Rosa, California. Space is limited to 16 teams.