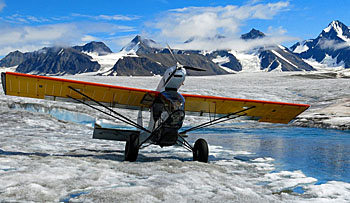 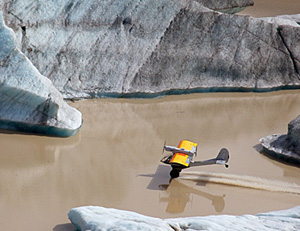 Water skimming between glaciers; don’t do this in most Light-Sport Aircraft. 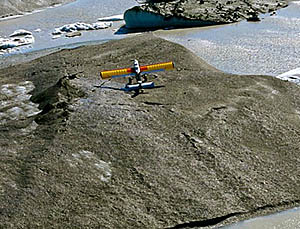 For most airplanes, this rock-strewn glacier fragment would not offer a comfortable landing. 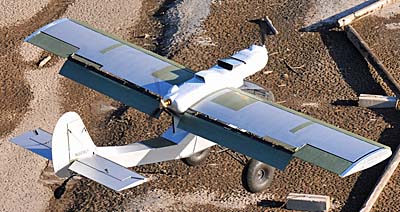 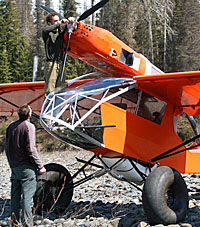 Hopefully DoubleEnder mechanics have no fear of heights.

Recently I became of aware of one of those “Oh, wow!” airplanes, one that can generate much the same response as Just Aircraft‘s attention-riveting SuperSTOL. At first glance, DoubleEnder intrigued me. At opposite corners of the USA, we now have twin Rotax engine sport planes: the long proven AirCam in southern Florida, and a newer sensation, Double Ender in Alaska. Some readers may believe neither fits this website’s focus on LSA, light kits, and aircraft Sport Pilots can fly; like AirCam, Double Ender weighs too much (2,500 pounds gross) and has too many engines (dual Rotax 914 turbos each modified to 130 hp) to be an LSA. However, both are sport planes powered by Rotax engines. Plus, look at the accompanying photos. They inspire by showing flight qualities similar though not identical to AirCam. So, here’s a preliminary story of this unusual aircraft.

“The DoubleEnder concept came to existence after a decade of bush flying in Africa and Alaska. It was born and bred to be the ultimate platform for flying in a wild and remote environment, one where safety, performance, and visibility are all extremely crucial.” Developers started the design in 2007 stating “safety was the single most important factor when creating the aircraft, and the rest was built around it.” Their design assured wide open visibility; instruments were “reduced to the bare necessity;” performance was maximized, geared to maneuverability; and slow flight. “With 260 horsepower available to the pilot, the power to weight ratio exceeds what is normally found in this category of airplane, giving it extreme performance in regular conditions, while retaining enough power to keep you going in the event of an engine failure.”

The prototype first flew in 2010. After initial test flights and hours accumulated at the development base, DoubleEnder headed to Alaska. The developers felt it was essential to test the aircraft in the environment for which it was designed. “[Alaska] is not a forgiving environment … any failure confronts you with the reality of the glaciers and forests.”
The designers believe that for flying in Alaska, “reliability is not a luxury, it’s a necessity.” After more than seven years the prototype airplane has reportedly used four wing configurations, three flap designs, two airfoils, three types of roll spoilers, four ailerons designs, three horizontal stabilizers, and two vertical stabilizers. “We needed a platform which enabled us to fly over any terrain, at any altitude with the comfort of knowing that an engine failure would be a non-event.” The developers report DoubleEnder can climb on one engine at several hundred feet per minute at sea level and is able to maintain altitude at 2,300 pounds at 10,000 feet. “[Double Ender] can even takeoff on one engine. In an emergency needing even more performance, and as a last resort, you can simply pull the red lever next to your seat, which will open a trap door in the auxiliary fuel pod, allowing you to dump over 300 pounds of fuel in a matter of seconds.”

Flying the airplane (video) appears a unique experience. “Stall break is gentle and the airplane mushes down. This low speed maneuverability factor is crucial and provides a margin of safety that is not commonly found in fixed wing airplanes,” pilots report. “The push-pull design was … mostly to avoid any directional instability during an engine failure. This airplane was designed to fly in tight places, where one can’t afford any kind of deviation during an engine problem.” Despite the design effort, if things still go poorly, developers said, “The roll cage [and] fuselage were designed to absorb the forces of an impact, and protect the pilot and passengers.” Performance is also eye opening. Approaching at around 35 mph, ample forward visibility allows the pilot to see and avoid the obstacles in his or her path, while giant tundra tires accommodate uneven surfaces.

“The design is constantly evolving,” the developers said. “Currently we are designing our next version, a side-by-side iteration of the DoubleEnder, where a passenger can enjoy the same view as the pilot.” I’ve been corresponding with these Alaskan frontier pilots and will update this article as more information becomes available. However, today, their website has some fascinating photos and several remarkable videos, like the one below.

Update 11/1/13 — Key people involved with this attention-getting project that has since appeared in other online publications: Alec Wild … came up with the concept and design; Doug Keller … did all the mechanical engineering; Eric Lewis … built the DoubleEnder prototype; Pete Anderson … joined the team later on and has built several wings to date in collaboration with Eric.

Experience DoubleEnder in Alaska with this video: