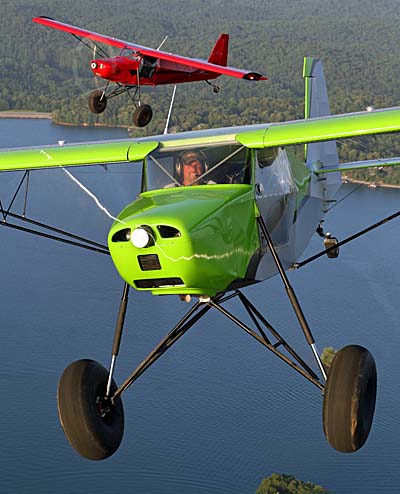 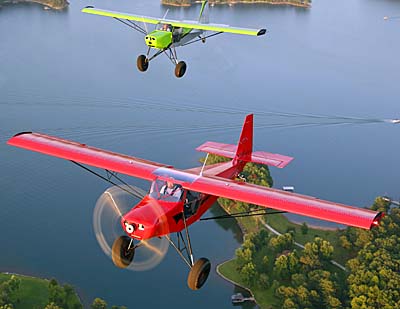 Go aloft in SuperSTOL with our video cameras providing a first-person view.

If you’ve read a newspaper or watched TV in the last couple decades, you might think America only imports stuff, mostly from China. Of course, that is ridiculously simplistic and just plain wrong but constant repetition of incorrect news may eventually convince people that it is the truth.

At one time, it seemed all Light-Sport Aircraft also came from overseas. Indeed, in the earliest days of Light-Sport Aircraft, rules in Europe allowed fully-built aircraft that were very similar so those producers could more quickly enter the new sector. In 2005 and 2006, more than two-thirds of all LSA were imported. While imports remain a strong and important supply of worthy aircraft, an increasing number are now produced in the USA.

American companies have caught up and are now arguably pulling ahead. This is true in the innovation of design, in production of ready-to-fly SLSA and in the kit market where American companies were always the strongest and have remained so. Many other countries don’t even allow kits but some do.

Just Aircraft recently announced that they received authorization from England’s Civil Aviation Authority to market their very popular SuperSTOL kits in the United Kingdom. This is apparently only a beachhead, with Just saying they are “taking the first step in establishing a global dealer network.” Go, Just Aircraft!

The Walhalla, South Carolina company is seeking additional dealers in Europe, Asia, Africa and South America. Most countries will require local approval by aviation authorities, but since Just has made it through the challenging process in England, they can reasonably expect other nations will be able to move forward more quickly. Many smaller countries with smaller aviation organizations — often called their CAA — focus on air transport and merely adapt rules they see coming from nations like USA or England.

Over its lifespan, Just has produced more than 600 aircraft kits for construction and operation in North America. Of the 600, nearly 200 sales have been for the SuperSTOL, their newest and most versatile design, reported the company. “We will continue to market factory direct in North America, but wish to have factory representatives in the other continents.”

Just Aircraft has achieved SLSA status for their Highlander model that preceded SuperSTOL, but has yet to take that step for the SuperSTOL model. The two are very similar but FAA actions over the last couple years suggests that Just would have to go through all the steps again. With kit sales brisk and with customers interested in spending less, the regulatory burden may not be worth the effort and expense.

SuperSTOL boasts takeoff and landing requirements of little more than 50 feet. “When fitted with 29-inch tundra tires, SuperSTOL can land in just about any kind of field, a clearing in the woods, riverbeds, or shorelines,” said Just. “To enhance the slow flight characteristics of the SuperSTOL, the wings are fitted with slats, Fowler flaps, spoilers and vortex generators, allowing for an airplane that virtually will not stall with power applied.” If the versatility that comes with the giant tires is still not enough, Just Aircraft can now provide floats and skis as options for the two-seat, high wing, tube and fabric aircraft.

One of the big attractions of kit-built aircraft is a lower price but those tackling the project will also gain from acquiring an intimate knowledge of their flying machine unlike what an owner gets when he or she buys fly-away models.

Still, the project is a big one and not every one is ready. So, to address this concern, organizations like Big Sky Aviation will help you in their Builder Assist Center. Get the background and details in the following video.