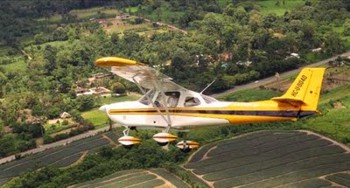 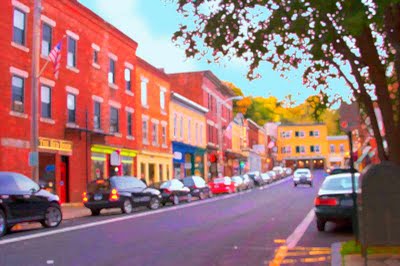 Soon to be a part of the GA flight line at a quaint country strip in western Mass. is the American Eagle. *** It’s new home will be at *** Great Barrington Airport (GBR), typical of small airdromes throughout our great land with its 2,585-foot paved strip, flight training and repair stations, charter ops and a loyal cadre of hangar-flyin’ pilots, some of whom I met the other day when I dropped in to say “Hi.” *** The lovely airport is five minutes from the cultural mecca of Great Barrington, nestled in the Berkshire Hills, a great place to live and a draw for Gothamites (NYC) to the south and Bostonians to the east. *** The strip was converted from a potato field in the ’20s, (maybe that explains its appeal to those of us of the Irish persuasion.) *** One regular who’s flown out of GBR for decades, after I asked him when the new Eagle SLSA would arrive, shot back, partly in jest, “Whattya want one of them for?” *** Once I told him a bit more about the industry and my little corner of it, we had a good yak about things all pilots love to talk about, starting with airplanes and ending with…airplanes. *** The American Eagle is an all-metal, ASTM-certified (#62, Nov. 2007) high-wing airplane produced wholly in the U.S. [UPDATE — Eagle is actually an airplane designed in Columbia by a company called Ibis. American Eagle is assembled in Oshkosh with some American-sourced components added. –DJ] *** Plans are to train with it and also rent it for $100/hr. *** It’s an attractive airplane, and Cessna flyers, the yoke’s on you – two of them in fact. *** I’ll report on it once I get a checkout, likely in March when we’ll be looking for signs of Spring. *** Apparently the production Eagle is built and just waiting for good weather to relocate to GBR from its birthplace – which, fittingly, is Oshkosh, WI. *** —photo courtesy Eagle Aviation