An example of a motorglider that may qualify under the FAA’s proposed Sport Pilot rule is the lovely Lambada with its wonderful compound wings.

Ultralights to the right, sailplanes to the left and hang gliders dangling made for a lively display in the Ontario convention center. 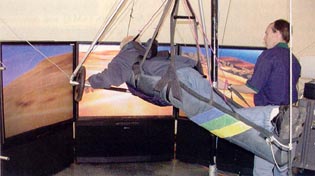 Programs developed with the powerful computers at Silicon Graphics offered a real flying sensation as results were viewed on three large-screen televisions. 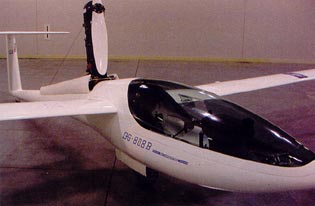 The sleek GD 808B motorglider has a fully retractable tractor-style powerplant.

AirSports Expo attracts a large crowd and many vendors.
On the first day in Ontario, California, you could see this was going to be the largest AirSports Expo yet. In the shadow still lingering from September 11, many wondered and worried about participation and attendance, but the concern was baseless. A flurry of activity in the last few weeks before the show brought so many requests for exhibit space that the already designed floor plan had to be scrapped and redrawn.
More than 2200 pilots and other visitors saw the exhibits of 65 vendors. While still small next to Sun ’n Fun or AirVenture Oshkosh, this was a good turnout. The range of vendors included many aircraft suppliers and all manner of accessories and informational products.
Gathering of Eagles
AirSports Expo represents the combined efforts of the Soaring Society of America (SSA), the U.S. Ultralight Association (USUA), and the U.S. Hang Gliding Association (USHGA). The Academy of Model Aeronautics (AMA) and numerous soaring organizations from museums to affinity clubs also participated.
When invited by the SSA to join its annual convention and show, the USUA, USHGA, and AMA responded positively, realizing that common needs outweigh individual differences. In past events, the Balloon Federation of America and the International Aerobatic Club have also been part of the event.
In the future, AirSports Expo will become its own show rather than being an SSA event with invited guests. If it can build on the momentum evident this year, this traveling sport aviation show could become an important early-season event for various recreational flying groups.
This show is about sport aviation at its truest. One reason for this is that all of these aircraft are commonly flown solo, for the pure joy and challenge of their pilots. Hang glider, ultralight and glider pilots all fly dual for training or other benefits, but their main operations are done solo. This is also a characteristic of model flying, skydiving and aerobatics, so it’s not surprising that these groups are also interested in AirSports Expo.
Networking
In its fifth year, AirSports Expo has also come into its own by assembling various sport flying groups, and it was a good time for acting together. The FAA’s issuance of the Sport Pilot NPRM only days before the show galvanized interest from hang gliders, ultralight pilots and sailplane owners who may all be affected in some way.
When you stand next to a pilot who flies something different from what you fly—yet the two of you share an opinion about FAA actions—you realize the value of gathering at a common venue. Shows such as AirSports Expo are efficient and cost-effective ways for people of like mind to interact.
Because the show travels, it also has unique outreach potential for light sport aviation. The National Business Aviation Association (NBAA) and AOPA have traveling shows, but sport aviation relies mostly on outdoor events where flying takes place. While flight activity is great, these shows tend to become quartered somewhere, often in out-of-the-way places. The public must travel to them, rather than the other way around. If aviation is to grow and replace its aging population, it must attract non-pilots, preferably younger ones. Taking AirSports Expo to the people is a good step in the right direction.
European airshows are mostly indoor events, and while flying is part of the action, it isn’t the central attraction as it is at U.S. shows. Yet the European concept seems to draw the public well because show organizers work at providing things for visitors to do.
In that vein, newcomer activities such as the deluxe hang-gliding simulator at the Ontario AirSports Expo may interest a generation brought up on video games. From there, perhaps a genuine interest in flying will be stimulated by seeing and touching real flying machines.
Industry experts and top pilots gave numerous talks. Association members attended most of these, but some were geared to newcomers. One session on how to get started in ultralight flying is an example.
FAA Launches Sport Pilot NPRM
This new proposed rule has captivated much of the sport flying public. It was finally announced less than a week before the show began, and FAA officials Sue Gardner, Scott Sedgwick, Mike Henry and Steve Brown were all present at the Expo to answer questions and get reactions.
Standing-room-only crowds in large rooms were polite to the FAA representatives, showing a level of acceptance for the new rule. Of course, many had questions. The hang-gliding enthusiasts were particularly delighted to arrange a breakfast meeting with the FAA folks. As the proposed rule appeared to directly affect both two-place hang-glider training and aero towing, interest and anxiety were high. Industry leaders left the meeting feeling that the FAA “got it” about hang gliding needs.
The ultralight association had a wonderful chance to host FAA meetings, proving its relevancy in the new world of Sport Pilot. And the FAA recognized USUA’s Tom Gunnarson for his years of work on the committee that inspired the new rule.
Soaring members seem unaffected by the proposed rule because an FAA glider pilot license and aircraft registration already exist. Yet new machines, especially motorgliders, may come from the Sport Pilot side, so SSA paid plenty of attention to the FAA activities.
One beautiful example of a soaring machine was the Lambada motorglider with its exquisite compound-curve wings. It sits on conventional trigear and is pushed by a four-stroke Rotax, giving it potentially broad appeal to soaring and power pilots.
Because the event is part of the SSA’s annual convention, the show is naturally blessed with a wide variety of sailplanes. From a flying or an artistic standpoint, these have to be some of the loveliest machines aloft. KP