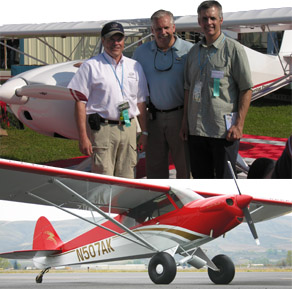 Want to win a free Light-Sport Aircraft? You missed one chance but the other is still available. Organizations like EAA, AOPA, and Sporty’s have given away airplanes as incentives. Now, LSA have “arrived.” *** At the May 2008 Alaska Airmen event, CubCrafters supported the organizer’s fundraiser; a $50 ticket bought you a chance to win a $130,000 Sport Cub. This LSA was generously equipped and had a new red-over-white paint scheme (photo) plus the first pair of lightweight, Kevlar-reinforced, 26-inch tundra tires that are “perfect for Alaska pilots,” said CubCrafters VP Todd Simmons. *** The LSA you can still win is Sun ‘n Fun’s first-ever sweepstakes airplane: a Mountain Aircraft American Flyer, distributed nationally by Sportsplanes.com who donated the aircraft with support from others including Lockwood Aircraft Supply. The famous Florida airshow will announce the winner on opening day of their 2008 event (April 8-14). Tickets are only $5 or five for $20 to win the well-equipped airplane valued at $79,795.