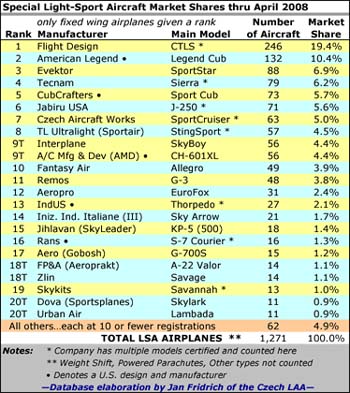 In the first four months of the year, we’ve seen a few climbers: Czech Aircraft Works and Remos improved their rank the most: Highest 2008 sales were (in order): Flight Design, CZAW, Remos, Jabiru, Tecnam, and Legend.

I can identify four factors in the economy presently affecting airplane sales: Potential customers (often with plenty of assets or creditworthiness) see the value of their stock portfolio going up and down like a roller coaster; worry over their once-soaring real estate, now down markedly in some areas; witness the continuing rise of the euro-dollar exchange rate, bringing much higher prices for many LSA; and, fret over a climate of political uncertainty during another election cycle. *** Perhaps due to these factors GA single engine piston sales are off 28% compared to the same period last year, according to GAMA. LSA sales are off 30% compared to trends six months to a year ago. *** Jet and turbine aircraft sales are up, but 2008 deliveries of those aircraft stem from orders taken 2-3 years ago. Contrarily, personal and sport aircraft sales react quickly to the slightest perception of economic shakiness. *** Despite that we have some bright spots. Large ad expenditures paid off with a good advance for Remos. The Flight Design machine drives on as it always has and Czech Aircraft Works is experiencing healthy registrations. Jabiru continues to grow steadily and Urban Air‘s Lambada has made the top 20 for the first time. Hopefully, the last eight months of the year will offset the slow start in ’08.