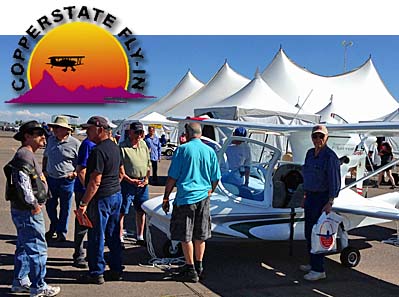 Copperstate 2015 crowds were good on Friday and Saturday as shown by a throng examining this Scoda Aeronautics Super Petrel LS seaplane. 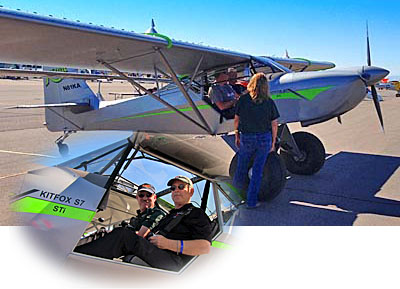 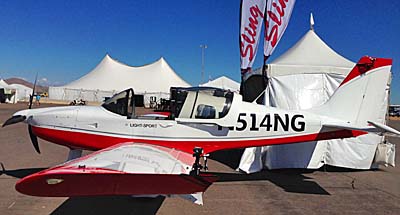 Sling LSA was one of two The Aircraft Factory models we flew at Copperstate 2015. 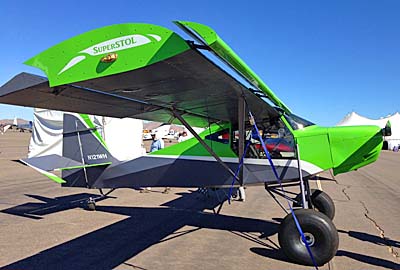 Just Aircraft’s SuperSTOL painted in the colors Rotax BRP uses for their fuel-injected 912 iS Sport engine.

In this Copperstate Part 2 article we resume the list of aircraft Videoman Dave and I reviewed at the show south of Phoenix, Arizona in Casa Grande. To remind you, this was the 43rd running of this show that invites all sorts of aircraft — and many dozens did fly in each day plus others did fly-over demonstrations.

However, Copperstate generates a particularly strong response from manufacturers and representatives of Light-Sport Aircraft, light kit aircraft, and utralights. That makes it a must-go show for our team at ByDanJohnson.com and Dave’s SportAviationMagazine.com YouTube channel that so many of you seem to enjoy.

Like other shows, many of you approached us at the event and expressed your ongoing interest in the video content we create. We are very pleased about your loyal viewership and will continue to work hard to build our growing video library … already at 400+ videos and moving steadily to 500 and beyond. Dave started his channel before I joined the party and his channel now offers around 1,000 videos … lots to enjoy!

KITFOX STi — Around the globe, everybody knows Kitfox. Some 6,000 kits have been sold and owner John McBean is sure of more than 4,000 flying all over the world. (Many countries don’t report such things so he was estimating conservatively.) No matter the precise count, Kitfox qualifies as one of the most successful kit aircraft of all time.

John and his group have also achieve Special LSA status for the Super Sport model, sometimes referred to as Series 7. Dating back nearly three decades Kitfox is a very familiar shape, but what you might not know is all the updates that have occurred over the years. While early Kitfoxes had a reputation of being very light on the controls and a bit jumpy in yaw, that’s all ancient history for the models produced under John and Debra McBean’s careful guidance.

Yet making the aircraft more refined and more enjoyable to fly is not all the Kitfox’ers have been doing. At Copperstate I went aloft with John in the STi, which stands for “STOL inspired.” With substantial changes to the wing (more chord, for example) and 29-inch tundra tires, the STi left the runway in even less distance than a typical Kitfox, which is no slouch in that department. The flight with John proved he is a consummate professional with very adept in-flight practices that show his years of experience. I believe you’ll enjoy the VPR this flight created.

SLING LSA and SLING 4 — From way down under in South Africa comes the Sling. Ha! That long distance is no big deal, really. This company has flown multiple models all the way around the world | not once, not twice, but three times! I guess that answers all questions about the cross country capability of this handsome design | or designs. Yep, at Copperstate, I got to fly the Sling LSA but also the Rotax 914-powered Sling 4, their kit-built four-seater entry.

Sling was a bit late to the LSA party. While The Airplane Factory had been operating in South Africa and selling in other countries, The Airplane Factory USA only brought in the first Sling in 2012, SLSA #125 out of 136 so far. When it arrived, Sling displayed some very interesting lines; I especially like the angular engine cowl shape. Obviously, the designers believe the craft is very solid as they were willing to make ’round the world flight #1 almost immediately after the design was completed and built. That’s confidence! Main man Mike Blythe brings tons of experience to the table and it shows.

However, The Airplane Factory’s presence in the USA owes a debt to Matt Litnaitzky and his team. While also tending to the build-up of MGL Avionics , Matt has calmly and steadily nurtured TAF’s models now including a Sling SLSA and EAB kit in both tricycle gear and taildragger plus a roomy four seat Sling 4 kit that boasts 1,000 pounds of useful load. I got to fly both at Copperstate and we did a fourth VPR on the LSA model. Look for it when the editing chores are done.

JUST SUPERSTOL — At the Flying Magazine Aviation Expo in Palm Springs, California the week before, Videoman Dave and I sharpened our focus on women in aviation. We shot four new videos about women pilots and aviation participants and we continued that at Copperstate in Casa Grande, Arizona.

We didn’t fly in SuperSTOL as we had already done that at Sun ‘n Fun (video) with Just Aircraft designer, Troy Woodland. Instead we focused on this SuperSTOL because Hutch Hudgins was aided by wife Ann Summerton in building this example. Their five month effort on six days a week moved to even longer hours every day of the week before they needed to head back to Montana. Every step of the way, this aircraft was a husband and wife project. Sharp readers may observe that this SuperSTOL is painted in the colors Rotax uses for their fuel-injected 912 iS.

A nurse by profession, Ann was no delicate flower guilted into helping her husband. With obvious pride, she threw herself into the project just like Hutch and the result is first a vastly greater familiarity with literally every part on the SuperSTOL but also a deep and genuine interest in the airplane. Now the couple will host builders of SuperSTOL at a builder assist center they are creating where folks can come assemble their kit with supervision from Hutch and Ann (when she’s not helping other folks in her nursing role). More info will appear in the video that follows.

We have more videos coming about women in aviation that we think you’ll enjoy! Click back often.