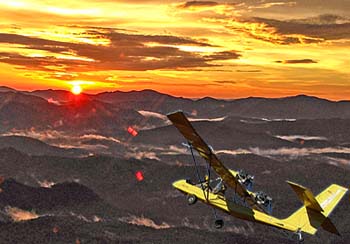 The landscape around Heaven’s Landing is beautiful but rather forbidding to low-level single engine flying. AirCam can loiter easily and can slow into the 35-knot range to allow full scenic absorption. See full AirCam specs. 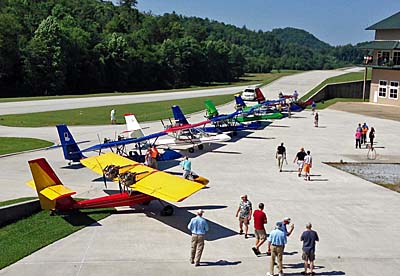 At one of the company-organized AirCam fly-ins, a collection of colorful and powerful twin engine aircraft gathered at Heaven’s Landing, a beautiful airpark development in the Northeast Georgia mountains. 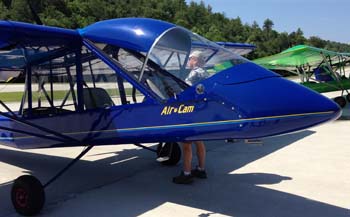 Lockwood Aircraft has been working on a full enclosure canopy for AirCam; here you see the prototype. It can be removed in 30 minutes. 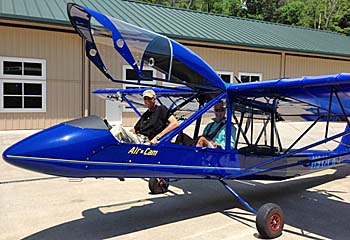 Phil Lockwood (front) and Robert Meyer (not shown) gave many sales demonstration flights and offered area rides to others in one of the very few airplanes that will allow flying, safely, at low levels over densely tree covered terrain.

Company fly-ins are surprisingly rare despite offering a useful tool to propel new sales, to stimulate interest and camaraderie among existing owners, and to invigorate enjoyment of flying machines. This message became more obvious as a number of people joined a group of AirCam owners at Heaven’s Landing, an airpark in northeast Georgia that is surrounded by hundreds of acres of densely forested nature managed by the U.S. Forest Service. Mountains rise to 3,000 feet above sea level and form an undulating landscape of tree-covered slopes. Such an area is perfect for an aircraft like AirCam that so excels in low-level flying. Indeed, I cannot think of another aircraft I would willingly fly over terrain where landing areas are so sparse. For those who do not know, AirCam is essentially a grown-up ultralight with twin pusher engines that can easily climb — even take off! — on only one of its two powerful engines. At 1,680 pounds and with two Rotax 912 engines producing 200 horsepower, AirCam is so potent that it can ascend at 2,000 feet per minute at full thrust and can still climb nearly 500 fpm with one engine idled. As one owner explained, AirCam operates at roughly the gross weight of a Piper Cub, which once flew with only 65 horsepower. In another comparison, AirCam is barely heavier than a Cessna 152, which has half the horsepower.

AirCam is produced by Lockwood Aircraft, one of several companies that share the last name of principal Phil Lockwood, a man known widely for his airshow seminars that demonstrate his encyclopedic knowledge of powerplants especially the Rotax line and particularly the 9-series. As he operates the largest service center for the Austrian engines, Phil has often been involved in the manufacturer’s investigations of new engine models, lubrication products, service techniques, and more. His steady pursuit of knowledge for the 9-series engines has made him a leading global expert who is highly sought-after for his mastery of the subject. Of course, regular readers will recognize that with its twin engines and higher weight, AirCam is not a Light-Sport Aircraft. Indeed, it can only be bought as an Amateur-Built kit and you’ll need at least a Private Pilot certificate with multiengine rating to fly one. Before FAA changed their mind (they reportedly will no longer grant an ME rating flying only in AirCam), I was able to earn my multiengine rating in an AirCam including taking the check ride. It must be one of the very easiest multiengine aircraft in all of aviation; the unlikely loss of an engine is so easily managed and the airplane performs so well on a single engine that winning the ME rating in one is almost cheating. However, this makes the flying machine highly enjoyable and inspires a great sense of safety.

About a dozen AirCam owners flew in for the Heaven’s Landing event include three from Florida, about a six-hour flight. As I assisted the company prepare for a new video, I interviewed owners and others who had just taken an AirCam flight. In my regular video taped conversations with pilots I often have to remind them to smile and show their enjoyment. While I understand many folks get nervous with a camera trained on them, the AirCam’ers appeared naturally motivated; everyone smiled often and especially when asked how they enjoyed the flight or their ownership. Their enthusiasm is infectious which probably explains one reason why Lockwood Aircraft can host a succession of AirCam fly-ins that are well attended. You can get some sense of their enjoyment by watching a company video. If you’ve not seen one of these productions I encourage you to check them out. AirCam videos are polished and professional efforts with flying scenes you won’t see from other companies. Go to their website for a taste or find the company’s exhibit at airshows where they regularly have a large screen looping a BluRay DVD.

Company pilots Phil and sales director Robert Meyer flew prospective customers and others all day long for two days, logging enough such flights to wear out most pilots. It was worth it, though, as they gained a couple solid sales and stimulated interest from others that may decide later. The location of Heaven’s Landing gave Phil and Robert an excellent venue to show AirCam as one of the very few airplanes that will allow flying, safely, at low levels over densely tree covered terrain. If you love sport flying and you’ve never considered an AirCam — which can be built for $130-150,000 — you might want to attend an AirCam fly-in and sample this special machine. AirCam is a kit that sells for more than $100,000 with engines (that are worth around half the total) but it is singular in its capabilities and the company is so respected for its quality and service that Robert reported selling 16 AirCam kits in the last nine weeks. Any company would love to match such a performance. More than 150 AirCams are flying and the demand is such that used, finished examples command near-retail prices that show how well they retain their value.

Take a run down the line of AirCam assembled at Heaven’s Landing in this video.