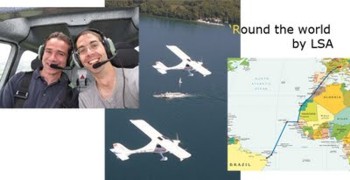 So what do you do for a break from your regular airline gig? Fly around the world, of course! *** These two airline pilots plan to circumnavigate old Terra in 2010 to mark the 100th anniversary of the first Swiss pilot license holders. *** In April, 2010, Yannick Bovier and Francisco Agullo will launch in two, not one but two, Flight Design CTLSs from Switzerland, fly west down the coast of Africa and hop the Atlantic to Brazil. They’ve even named their planes: Dreamcatcher and Celine’ (for a daughter, not the singer.) *** The motivations are the “usual suspects” stuff of aerial adventure: to commemorate aviation milestones (Swiss) and inspire young people. *** What the hey, for me the inspiration is imagining making such a journey myself! And flying in formation for 25,200 miles? Now there’s a concept. *** The intrepid pioneers plan to visit 18 countries, span five continents and cross two oceans. That’s quite a challenge for any airplane, and will surely add boffo street cred to the image of LSA, eh? *** Bonne chance et bon voyage, mes amis! *** —photos courtesy Azimuth 270