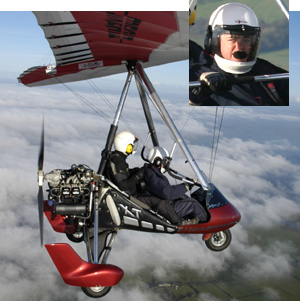 Two imported trikes (AirBorne and Air Creation) are leaders in the U.S. market but both have a presence in many other countries. You are invited to read my report on the AirBorne XT 912.

Lance Armstrong helped Americans become familiar with the major French bicycle race by winning seven times. Now a Frenchman is making a name for Australian trike maker AirBorne among French pilots. AirBorne’s French distributor won the Microlight Tour de France for the second year running aboard his Airborne XT-912 mated to the Streak 3 wing. Serge and Genevieve Bouchet operate Veliplane ULM Paris, one of the largest microlight schools in France doing both weight shift and three axis training. The Tour de France routes pilots around the country as they navigate and race against each other. *** Airborne won French approval for their entire trike line and two years ago Airborne achieved a milestone earning British CAA acceptance for the XT-912. “So far, we are the only import trike manufacturer allowed to sell ready-to-fly aircraft into the UK market,” said the Australian builder. AirBorne XT 912 has also won SLSA airworthiness in the USA as number 30 on our SLSA List. *** Merry Christmas from ByDanJohnson.com!