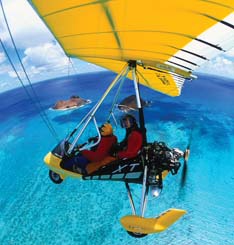 My good friend Gerry Charlebois flies vacationers and others over the beautiful Hawaiian island of Kauai (he’s flown over 10,000 folks!). He loves his XT912 and gives high points to AirBorne for service.

On St. Patrick’s Day, Friday March 17th, 2006, the AirBorne XT912 became the second brand of trike ever to join a very exclusive club. East Coast dealer, Terri Sipantzi, reported, “We gave birth to AirBorne’s first SLSA last night at 10:30 p.m., PST. An AirBorne XT912 registered as N-912PW was issued its Special Light-Sport Aircraft airworthiness certificate by Brian Carpenter of Rainbow Aviation.” The down-under brand has worked hard to establish an American following and they have for years met a demanding Australian certification standard, so no one is surprised that they were able to show compliance with the ASTM rules. You can read my flight review of the AirBorne XT912 in EAA’s Sport Pilot magazine for February 2006. We’ll be posting the article here (some 90 days after first publication). Congratulations to AirBorne and their U.S. team in becoming the 30th SLSA to meet FAA-approved standards.