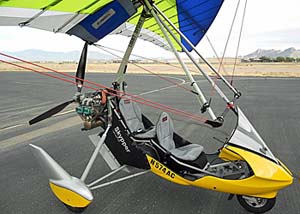 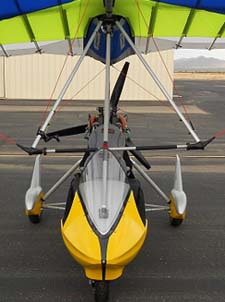 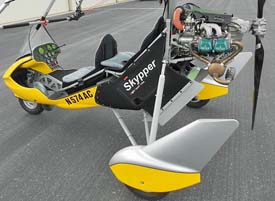 Looking closely at the carriage, you can see it is constructed of welded components. 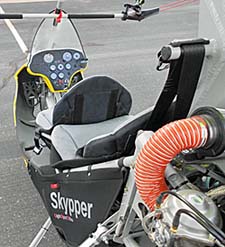 Skypper is simpler and that means lower cost. How does $50,000 for a ready-to-fly Light-Sport sound?

Congratulations to Air Creation USA for winning Special Light-Sport Aircraft approval for their newest weight-shift control aircraft called the Skypper. That’s a worthwhile achievement for any new LSA, but before I tell you how this model is different, let me do another explanation.

In summer of 2012, FAA issued an internal order — meaning it was intended for their field offices and Designated Airworthiness Representatives (DARs) and others. This order with a name only a government agency could love — 8130.2G CHG1 — changed some of the rules about how aircraft gain their SLSA Airworthiness Certificates. One company that got trapped by the learning curve that followed was Air Creation USA, these days operated by Neil Bungard. Neil was relatively new to the ASTM standards process and any misunderstanding he may have had of CHG1 was matched by FAA officials and non-FAA DARs. Everybody had to read and decipher FAA marching orders as described in the lengthy document. Few fully understood it when Neil first tried to get his new model approved and since one of the things CHG1 specifically called out was a “new model,” this started a series of hoop-jumping exercises that consumed Neil’s time for many weeks. To his credit, he sorted it all out and therefore was awarded a new certificate for Skypper. Therefore, let me repeat my congratulations!

Some years ago Air Creation gained SLSA approval for the Tanarg 912 and the GTE 912. Skypper has similarities to each but is not identical, therefore despite the earlier approvals, Skypper represented a “new model” and thereby Neil got tripped up by CHG1. Confused? Well, now you know how Neil felt. However, all’s well that ends well and the end was full approval for a new model. Whew!

As the importer Neil wrote, “Some of the things that I like about the Skypper include: • lower center of gravity; • wider wheel base; • truss-built frame; • adjustable differential braking (front and back wheels); • easy bolt-on fairing option, and • Rotax 582, 912-80 hp, and 912-100 hp engine options.” He added that Skypper flies well with Air Creation’s legacy wings (Fun 450, iXess, Kiss) plus their new variable-geometry wings (Bionix 15 and 13, and Nuvix). Neil also said, “Skypper’s price is coming in at about $50,000 for the 100-hp version given the current exchange rate between dollars and euros.
rate.

Compared to most choices, $50,000 is a great value for a new SLSA with the same powerplant most SLSA presently use. This engine alone accounts for nearly $20,000 of the full price. Note that by a “truss-built frame” Neil refers to a welded steel carriage versus aluminum tubes gusseted together with bolts. Air Creations first debuted welded carriage frames on the Tanarg (pilot report) but has now obviously refined the effort (nearby photos). Variable geometry wings mean that the spread of the wings can be changed at any time. This can have a significant effect on speed or handling and is a development the hang gliding world refined some years back. FAA noted recently that they will begin specifying which wing can be used with which SLSA trikes. Wings can make quite a bit of difference in how the aircraft performs and for this reason trikes have unusual flexibility mostly unmatched in fixed LSA (with one noteworthy exception being the Phoenix LSA motorglider that can change wing tips to achieve different flight characteristics).