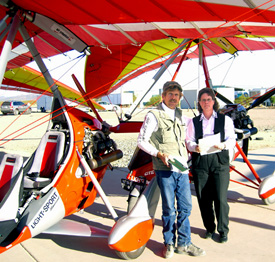 Air Creation’s magnificent Tanarg 912 and their popular GTE 912 were presented with the first two weight shift control Special Light-Sport Aircraft certificates on January 20th in Arizona at Kemmeries Aviation flight center where Air Creation USA is based. Not only are these the first two certificates ever issued for weight shift control LSA, the Tanarg 912 and GTE 912 were approved with the iXess, iXess Training, KISS 450, and FUN 450 wings. None of the 24 airplane SLSA holders can make that claim of versatility. (If you don’t know this quality of trikes…the chassis or carriage can be flown with a variety of factory-approved wings.) Air Creation has delivered more trike aircraft than any other builder. This French company is 20% owned by American John Kemmeries, an icon and leader of weight shift aircraft in the United States.