Electric Motor Glider in prototype form with its “sustainer” motor showing at the rear of the cockpit enclosure (detail photo below). 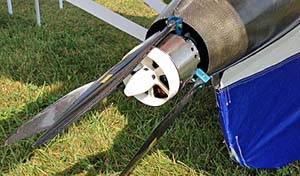 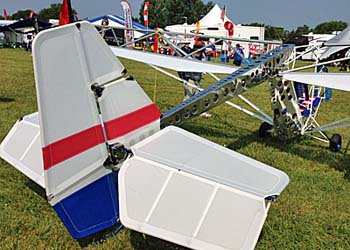 EMG is a mix of customer fabricated aluminum box-and-truss plus part from kitbuilder, Quicksilver Aeronautics. 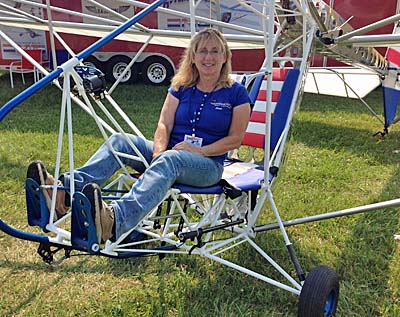 Carol Carpenter sits in the front of Adventure Aircraft’s two seat Experimental Amateur Built model in development. It will use two electric motors (details in article).

Update 8/8/14 — See our video interview about EMG at the end. An unpowered EMG — or Electric Motor Glider — from Adventure Aircraft has already taken 400 flights; it has also been fitted with a small electric motor … complete with carbon folding prop. A new Experimental Amateur Built (EAB) two seater is now taking shape and both variations were on exhibit at AirVenture 2014 in the newly named Fun Fly Zone (formerly Ultralight Area). EMG’s spark is provided by the dynamic duo of Brian and Carol Carpenter of Rainbow Aviation, well known for their LSA maintenance courses including the LSR-M (Light-Sport Repairman Maintenance) credential that has prepared many mechanics to do serious work on the growing fleet of LSA. EMG builder Adventure Aircraft is a subsidiary of Rainbow. Evidently this hard working pair aren’t fond of wasting many hours with something so mundane as sleep because the project is unfolding quite swiftly. Their vigorous pace to propel EMG’s future success depends to a significant degree on parallel development of new technologies, primarily battery development.

EMG development has become more visible in the last year after taking its first flight in December 2013. Early flights were conducted as a glider towed up by a Honda Quad Runner. EMG’s gross weight is designed at 750 pounds to allow for several variations on the theme. For example, EMG can be built as a compliant Part 103 ultralight vehicle and later converted to an EAB, creator Brian Carpenter explained. Both Part 103 and EAB versions can be operated with multiple electric motors — a much less complex proposition than using multiple liquid fuel engines. A glider pilot can fly EMG solo as an EAB with multiple electric motors without needing a multiengine rating or a medical, according to Adventure Aircraft. EMG offers folding wings and tail and has a single large shock-absorbing centerline wheel. The removable “training wheels” use three quick-release pins that need only 30 seconds to remove. Such standard gear is useful for training and when maneuvering the aircraft with its wings folded. EMG is equipped with full-span flaperons that extend 30 degrees down and 8 degrees upward in what’s known in the sailplane world as “reflex.” Manual elevator trim helps the pilot adjust stick pressures though Brian reports EMG exhibits very stable and forgiving flight qualities.

If parts of the EMG look vaguely familiar to you, good eye! Adventure Aircraft is collaborating with Quicksilver Aeronautics on the manufacturing of EMG. “Wing covers are built by Quicksilver and we are obtaining many parts from them,” said Brian. He explained that his enterprise has been representatives for the iconic Southern California company for many years and the new management of the company led by President Will Escutia has become a willing partner as Adventure gets ever closer to production of the EMG. Quicksilver is rapidly strengthening and serious player with a new SLSA model, growing U.S. and international distribution, and diversity represented by the connection with Adventure Aircraft and EMG. Quicksilver supplies numerous hardware components to Adventure, with tubing in their signature blue anodizing and the longtime kit producer builds wing coverings using sewn Dacron similar to that used on their powered aircraft line.

“Theoretical flight of three hours are possible with current technology,” forecast Brian (emphasis ours). The next, two seat prototype will be flown with two 20-horsepower Predator 37 motors from Plettenburg of Germany while the original proof-of-concept prototype seen at AirVenture 2014 had a single “sustainer” motor emerging at the rear (photo). Video on Adventure Aircraft shows this aircraft in operation. “Motors, controllers, batteries, and props are all off-the-shelf components of the giant-scale RC aircraft industry,” said Brian. The airframe is a unique, new creation. Keep up with the development by following Brian’s often updated progress blog.

If you are as enthusiastic as I’ve become and want to consider purchase, what will an EMG set you back? Adventure Aircraft lists a Part 103 or Experimental Amateur Built Fast Build Kit for $16,000 before the electric propulsion system. If you can do “some welding,” EMG is even more affordable at $12,000. As Brian explained in our video interview, “While you build the kit in preparation for electric power, the state of technology will continue to advance.” Components like batteries are going through intense development and as with computer technology, the longer you wait the better — and cheaper — it gets, so why buy those elements until you are ready for them? If you want to check out the kit effort before diving in, Adventure will sell plans for $300 and you can upgrade from that point.