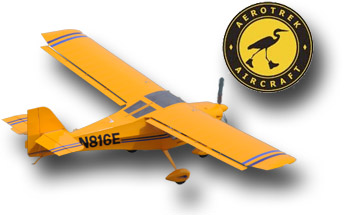 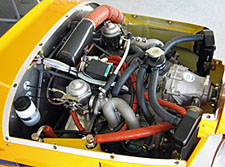 Aeropro’s quality is evident throughout including the engine compartment. 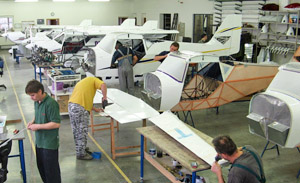 Aeropro spooled up production during 2011 so growing demand can be met faster in 2012.

Even though their price can be half that of some top-end LSA, the Aerotrek models are well equipped.

Aerotrek may be one of those “sleepers.” You know, the kind of company that does well, has few problems, and doesn’t need to make a lot of noise to be successful. Aerotrek’s tri-gear and taildragger models look great, fly well, and are priced so reasonably that sales are remarkably steady. The company ranks #12 in fleet size and came in fifth for 2011 registrations. The numbers aren’t big but they could be bigger, said importer and longtime light aviation specialist Rob Rollison. *** Rob noted their last year registration was “way below what it should have been, but [the manufacturer] Aeropro wasn’t able to ramp-up production quickly enough to keep up with increased demand for our planes starting in late 2010.” He continued, “They also had production delays during 2011 as they worked to get UK certification but this was quite worthwhile, resulting in a few nice improvements to our planes.” *** I can add that I know something about British certification and it is one of the most demanding systems in the world. If you satisfy the British CAA, you’ve achieved something. *** “We could readily have sold 16 planes in 2011,” Rob said, “if we could have gotten more planes from Aeropro and had more reasonable lead times.” However, Rob observes that the 2011 production ramp-up is bearing fruit. “For 2012, production has increased and there should not be any undue delays.” *** In reporting these facts about Aerotrek, I want to speak to a new general level of activity for the LSA community. Several companies reported good sales at Sebring, the first time we’ve heard this since 2008. Several industry players have told me that their phones are ringing and website visits are up. Right here at ByDanJohnson.com, December was a strong month, January set an all-time record, and if February had 31 days like January, it would equal or exceed January. The pilot mood appears to be lifting. *** Aerotrek agrees. “We’ve sold seven planes in the last eight weeks,” exclaimed Rob. “We will deliver a minimum of 14 planes in 2012. This isn’t wishful thinking as 13 of those planes are already sold.” While 14 deliveries in a year may not impress, this represents 25% of all the Aerotrek LSA registered in the U.S over six years. The USA accounts for about half of Aeropro’s production. Other active countries include England and Australia. “Aeropro is… increasing production in a responsible manner, taking care to maintain high quality,” noted Rollison. *** As part of the proof of Aeropro’s quality, the company underwent a LAMA audit some years ago and is taking renewed action following FAA’s 2009 industry assessment report. “I am taking steps to [produce] good annual internal audit reports and to provide those to FAA via LAMA, as was suggested.” Rob refers to discussions in a series of joint GAMA/LAMA meetings where manufacturers and importers continue to hear how they should bring assurances to FAA and other entities that want to know LSA builders are fully meeting the FAA-accepted ASTM standards. *** The first delivery of a Special LSA happened in April of 2005. Over the past seven years, this start-up industry has achieved a great deal, while maintaining a safety level FAA finds “acceptable.”