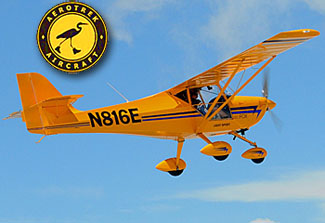 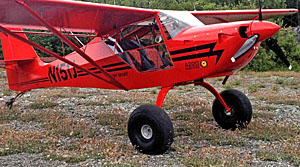 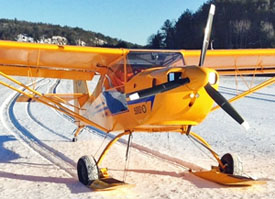 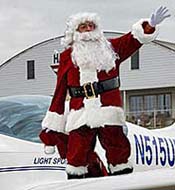 Thanks to U.S. Sport Aircraft for loaning Santa a SportCruiser this year.

You may have missed it. If so, this article provides another look at a LSA provider that I consider something of a “sleeper” … and if you do not know that term, it’s meant to be positive yet refer in this case to a company that does its thing well if somewhat quietly. I am writing about Aerotrek Aircraft and its two models, the taildragging A220 and the trigeared A240. These airplanes may look familiar — itself a good thing as they are based on a very well proven original design — yet they have seen steady updating and improvement that makes a distinct airplane as we head into 2014. Proprietor Rob Rollison has shown a very steady hand at the tiller and recently updated his company’s news.

“Sales of our Aeropro planes continue to be good — sold out until late-August 2014,” wrote Rob. “We will show 10 planes delivered in calendar year 2013.” However, his company also sold one to Mexico, so that one will not show up on our third quarter 2013 market share report to be published next week. Two more Aerotreks are aboard an ocean freighter so will be counted as 2014 deliveries. Another pair are reported complete but will not be shipped until after the new year. This suggests Aerotrek will continue a steady climb up from 2013. (Spoiler alert: Aerotrek will rise into the Top Ten this year.) “From European producer Aeropro’s view, they completed 14 planes to ship to Aerotrek in 2013,” Rob noted. He added that the conservative manufacturer might have shipped even more but has devoted resources to planning installation of Rotax‘s 912iS fuel-injected engine for possible future sale. “Also, the UK market is presently very good,” so some production has been diverted to England. Undeterred by these non-U.S. demands, Rob hastened to add, “Aeropro continues to be great to work with.”

Earlier in 2013 for the bush piloting enthusiast Aerotrek began offering the 26-inch Airstreak tires as an option for their A220 taildraggers. Since we’re now in the snow season at least in the northern climes, the Indiana importer also has wheel-penetration snow skis available for the taildragger. Aerotrek buys these from Summit Aircraft in Oregon. The first installation went on Karen Smith’s A220 in Canada with more presently being installed on an A220 in eastern Pennsylvania and in Alaska. Early adopter Karen gave the skis a great report. Having referenced a female owner/pilot, it’s worth adding that in 2013, three A220 taildraggers have gone to women pilots: Karen in Ontario; Patty Yould in Alaska; and Brenda Richards in San Jose, California. Welcome to all three adding to the guys that have bought and enjoy Aerotrek LSA.

It’s all good for Aerotrek it seems so this last bit is worth observing: the company will not be at Sebring 2014, their first absence if I recall accurately. Rob wrote, “I hate missing [the upcoming event],” but because he has committed to enlarging his space at Sun ‘n Fun and has long run his business carefully plus with deliveries already quoting well into 2014, he made the tough decision. “I expect to display at Sebring again in 2015,” he assured. The new Aerotrek space at Lakeland Linder airport is a big corner location near the east gate out to the runway, “almost in sight of Paradise City and across from Cessna.” Why does the company need such a large space? Well, Rob is keeping one idea a secret for now but another is this: “Starting at Sun ‘n Fun 2014, I’m planning to start making this sort of an annual ‘Aerotrek fly-in’ and see if we can get a dozen or more of our aircraft owners joining us.” He’s done well at attracting customers in the past and, given steady sales success, believes he will need “lots of room for lots of planes!” Good for Aerotrek!

As this goes to pixels on Christmas Eve, let me wish our readers a very Merry Christmas! All of us hope all of you can enjoy a fine holiday with your families. We sure appreciate your regular visits to ByDanJohnson.com and we want your holidays to be warm and wonderful.