Aerolite 103 from U-Fly-It has been on a tear for the last couple years, producing at capacity and stretching to produce even more for 2016. Some of those very attractively priced aircraft — way under $20,000 ready-to-fly! … take that, sluggish economy! — are headed off on the longest trip of their lives. The DeLand, Florida company has been shipping units to Europe where their German-based European distributor operates. 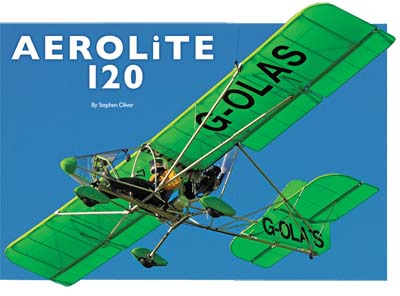 So much for too-costly airplanes. Aerolite 103 (and a few other well-priced examples from light aircraft producers) proves an airplane doesn’t have to be costly to deliver a good time. The German Aerolite 120 is somewhat costlier to account for shipping, German certification expense, etc.

“British pilots have embraced Aerolite 120,” said German distributor Vierwerk Aviation. “Aerolite’s proper design, very good quality, and meticulous workmanship in every detail have been praised and recognized by everyone.” Aerolite 120 is the European-approved version of America’s Aerolite 103. The 120 designation refers to the German 120-kilogram (264-pound) class that is remarkably similar to FAA’s Part 103. 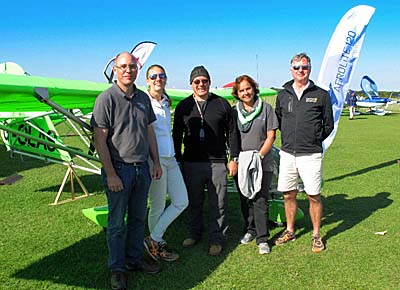 Vierwerk and their United Kingom (including Ireland) distributor Kairos Aviation, said “Kiwi” (referring to its distinctive green color) was a real eye-catcher and was presented at the LAA Rally event called Sywell 2015.

Aerolite 120 was tested to assure compliance with the strict German LTF-L/UL regulations, and falls well within the criteria for the UK deregulated category called SSDR (Single Seat DeRegulated). The first example sold in the UK is G-OLAS (the British version of an “N-number” registration), which was exhibited by Kairos at the recent Light Aircraft Association (LAA) Rally 2015 at Sywell.

You can read a detailed report on the experience of first UK Aerolite 120 owner Stephen Oliver in the November 2015 issue of LAA’s Light Aviation and relates the impressions of someone coming to the very light Aerolite from heavier aircraft and some readers may find this instructive. It is a very straightforward description with something of a surprise ending. 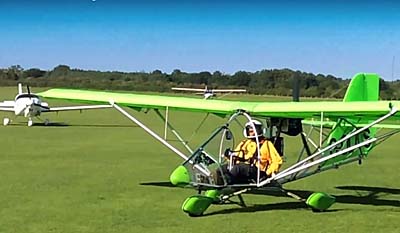 Some of Stephen’s comments from the article are selected below.

“For a very light aircraft (only 120 kilograms (264 pounds) and a MTOW of 250 kilograms (550 pounds), the Aerolite 120 carries little momentum, so she responds rapidly to control inputs and airspeed bleeds off very quickly; consequently, you have to keep the power on to some extent right through to the flare.” I don’t find that to be the case, but I have plenty of light aircraft experience, unlike Stephen.

“[On takeoff] I applied full power from the Polini Thor 200 Evo air-cooled engine, which had easily started first time, every time, and I steadily climbed flapless out of the airfield, heading north over Pitsford. Best rate of climb is 41 knots (47 mph), which gives 1.6 meter per second (320 fpm) [of climb]; that’s pretty much with full power at over 7200 rpm, [while] keeping a close eye on the temperatures.

“With so little weight, even with me on board, there’s little momentum to slow its response to control inputs; it all makes for a lively experience. The stall is quite benign at 35 knots (39 mph) clean.”

Much more detail appears in Stephen’s full-length report found at the link above. Also, you can watch a video below for the first flight of Aerolite 120 in England.