Life has settled down a little after the rush that began at the end of March. Five weeks back, Sun ‘n Fun was approaching to kick off the season of recreational flying. 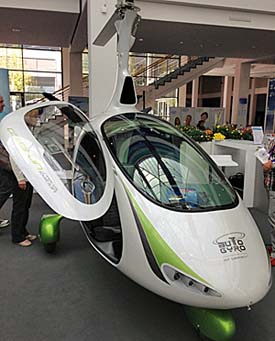 Gyroplanes are the biggest buyers of Rotax 912s and show sleek designs.

Aero in Germany followed with only a one day break before boarding the airliner to Europe followed by plenty of follow-up and contemplating the hot and fast action. With a couple weeks of perspective and to answer a common question — How does the industry look in Europe? — I have some final observations.

I found five areas to consider and list them below. Among all the many wonderful aircraft I saw, two particular subgroups stood out for me personally, one for its sheer success and the other for its subtle return to a higher interest plateau.

I refer first to gyroplanes and secondly to, well … what to call them? How about simply “ultralights?” Even that word isn’t right because Ultralight in Europe means something quite different from ultralight (vehicle) in the USA.

Following are topic areas I’ll delve into more deeply in the balance of May.

Gyros, gyroplanes, gyrocopters. As with ultralight, one word does not command everyone’s description. Regardless of what you call them a visitor to Aero could hardly avoid spinny-winged aircraft.

Gyros (the term I’ll use in this article) were in several of Aero’s big halls. [Note that “gyroplane” is now the more accepted term. —Dec. 2020] These handsome aircraft represent a wide range of interesting models and some have become so sophisticated that an American who knows gyros by the pioneering brand name Bensen would hardly recognize them.

Regretfully for most Americans, gyros remain the bastard child of the LSA sector. They were never allowed to be SLSA (or ELSA therefore) and so must come into the country as a 51% kit. Magni Gyro importer Greg Gremminger has fought the good fight as best he can, taking the leadership of an ASTM task group that fully completed a standard for gyros only to have it stall for years.

If FAA won’t allow fully-built gyros (“Why?” is an excellent question that remains unanswered), then the industry standard cannot be used. What a shame as we see a stunning development in Europe. 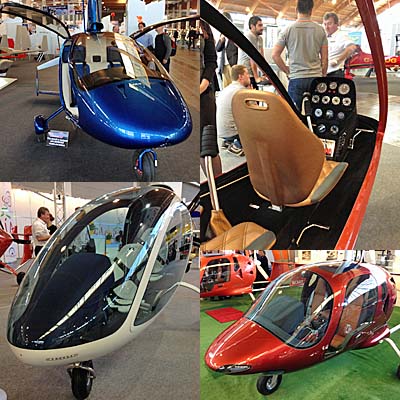 In the USA, you can buy the Magni Gyro line. Industry leader — coincidentally also the #1 largest buyer of Rotax 912 engines in the world, all aircraft types included — AutoGyro is well represented in the USA. And Spain’s ELA Aviacion is expected to acquire a representative in 2014 (which I’ll announced as soon as the deal is confirmed). As you can see in the nearby photos, however, other brands are also available and this is not a complete survey of the gyroplane field.

LAMA and its new advocacy partner USUA are hopeful to strengthen the voice of Mr. Gremminger in appealing to the agency to get the SLSA issue straightened out and let these aircraft come in as ready-to-fly aircraft.

If you may have shied away from gyros thinking they fly like helicopters, I can tell you differently. While they obviously share some traits, I’ve found that gyros basically fly more like fixed wing airplanes than helicopters (Watch our video pilot report). Especially as some models are quite reasonably priced, I can envision much improved sales if SLSA gyros could be offered to American pilots. A second USUA/LAMA Safety and Industry Conference is planned near the time of AirVenture and perhaps we can report possibilities after that summer event. 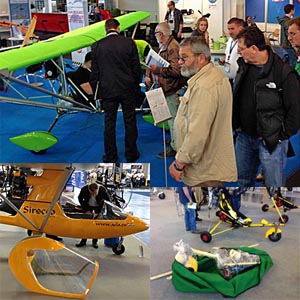 One of my personal delights is the lightest aircraft flown solo. I find an essential magic to flight when the aircraft is particularly lightweight.

We never lost “Ultralight Vehicles” in the U.S. — matter of fact, F.A.R. Part 103 has now been in place for 32 years! U.S.-style ultralights now have counterparts in Europe. The British use the term “SSDR” (for Single Seat De Regulated) while the Germans permitted a “120-Class” for aircraft that weigh only 120 kilograms, or 264 pounds. All three regulatory schemes envision essentially the same flying machines, though with the usual international diversity.

I already reported on the Aerolite 120 — sold in the USA by U-Fly-It as the Aerolite 103 — as a genuine attention getter thanks to its charm, appealing equipment list and highly-affordable price. Yet Europeans embrace other themes, too. 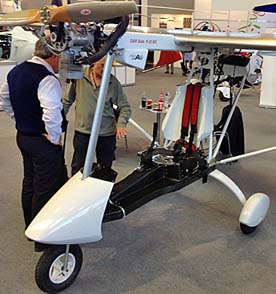 I referred earlier to the Sirocco NG (for “Next generation”). Its name is appropriate at this is a proven aircraft for more than 20 years. However, it employs new materials such as carbon fiber that were not in common use in those days and new ownership in combination with the regulatory relaxation has given Sirocco new appeal. Supplied out of the Netherlands, Sirocco is available as a kit for €14,500 (about $20,000) or ready to fly for €22,800 (somewhat more than $30,000). That even includes power from a 33 horsepower 627 cc V2 four stroke engine.

From Bulgarian producer Aeroplanes DAR comes the DAR-Solo, which some find elegant in its simple, even spartan finish. DAR-Solo’s empty weight is listed as 130 kilograms (286 pounds) and it doesn’t appear it has very much structure from which to slim down to the 120-Class weight. Yet in other ways, such as its 62-mph cruise speed, DAR-Solo appears it could fit the German or U.S. form of ultralight. Power is from the Hirth F33 that is a common engine choice for many of the lightest aircraft.

I plan to report more fully on the five listed items above, but this wrap-up survey shows some of the many choices pilots can enjoy. These delicious differences are a main reason why I’ve become an Aero faithful. You might also enjoy Europe’s top non-commercial airshow. Next years dates are April 15-18 followed quickly by Sun ‘n Fun on April 21-26, 2015.