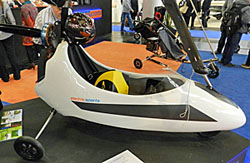 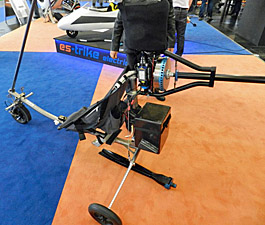 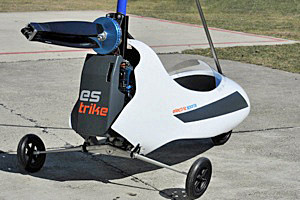 Aero 2012 is one of those shows that has interesting aircraft in more nooks and crannies than even a crack reporter like Dave Unwin can find. Thanks to Tom Peghiny (of Flightstar eSpyder, and Flight Design USA fame), we have more from the German show. —DJ ||||

At Apple press events, the late Steve Jobs would often tease the crowd with “one more thing.” Here’s the ByDanJohnson.com equivalent from Aero…

*** Enthusiasts of electric aircraft realize that the road to electric-powered, general-use aircraft is still off in the future. For example, we haven’t seen much lately about the electric Cessna 172 project. One thing seems certain: the first electric airplanes to find market success will surely be the lightest of the breed. *** Tom Peghiny sold his Flightstar designs to electric aircraft developer, Yuneec so they could advance the eSpyder. Tom confirmed Yuneec is hard at work and that we’ll see the eSpyder as an LSA in America but first it will appear as a German ultralight.

*** Besides Tom Peghiny’s work in the powered aircraft arena, he is also a longtime expert hang glider pilot. So when he raved about the Electric Sports trike he found at Aero 2012, I paid attention.

*** Designers Eduard van de Kraats and Wolfgang Zankl started their project in spring of 2011. Their progress was swift. Including the lightest batteries es-trike is claimed to weigh only 67 pounds or 99 pounds even with the longest-lasting batteries. Adding the ATOS VR 190 wing at 97 pounds, the total aircraft is approximately 164-196 pounds thanks significantly to a titanium trike frame (the carriage alone is a mere 26 pounds). An extended shaft keeps the prop out of disturbed air, which the designers say increases power and quiets operation.

*** The ATOS VR 190 wing is one of the most impressive available with a glide angle beyond 20:1, stall at 23 mph (on the es-trike) and top cruise speed of 55 mph. All these measurements keep the rig well with Part 103 parameters.

*** Takeoff in the es-trike requires less than 100 feet and it can climb at 400-600 fpm (presuming a pilot weight of 154 pounds; your results may vary). Endurance is specified as 25 minutes with an 18-pound battery pack up to two and half hours with a 51-pound battery pack. Even with the biggest battery set, es-trike still easily qualifies under FAR Part 103 but various battery packs are available. For a thorough review of all aspects of the es-trike read this PDF file.

*** Get more info on the es-trike at the company’s website or by emailing Electric Sports. The company is presently working on a two-seat version. The southern German company has no U.S. representation at this time.

For some excellent in-flight views of the Electric Sport trike with what may be sleekest wing available (the A.I.R. ATOS VR 190), watch this video: