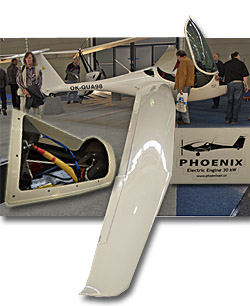 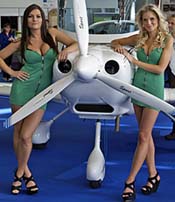 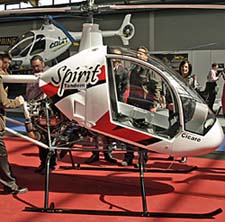 Dave Unwin continues daily coverage of the Aero event… wandering through the gymnasium-sized exhibit halls of Aero. All photos by Dave Unwin —DJ ||||

As I made my way through the cavernous exhibition halls I was amazed as always at how many new aircraft were showing. Aviation is a curious industry and — be it a desire to run an airline or design an aeroplane — it is obvious that logic often takes a backseat to emotion. The market is already saturated with neat little two-seat aircraft, and yet every year several more appear. *** Czech company TL Sport had a new three-blade, composite, electric constant-speed prop called the PowerMax on display, as well as its Sirius LSA on clean amphibious floats. TL also had a Rotax 912iS in a Sirius. In fact, just about every light sport type seemed to be fitted with the fuel injected engine from Rotax. *** Even some helicopters, such as the Cicare Spirit Tandem, were fitted with a Rotax. This neat little two seater is powered by a Rotax 914 Turbo, and has a gross weight of only 992 pounds (the European ultralight maximum, before a parachute). Constructed from 4130 aluminum it looked like a lot of fun, although you’d definitely want to be good friends with your passenger, as the cockpit is a little cramped for space. *** The DirectFly Alto TG912 looked very smart in a very colorful paint scheme. This is a very unusual light aircraft, as it offers air-conditioning as an option. *** At the FK exhibit boss Roland Hallam delighted in showing me their latest brainchild, the FK-51. Unlike most replicas, this scale replica of the immortal P-51 Mustang will even include the surface details, right down to the last screw and rivet. A sound system will be available which will make this Rotax-powered VLA sound as if it has a Rolls-Royce Merlin V-12 under the cowling. Peter Funk claim this will accurately reproduce the song of a Merlin, from start up to shut down, and if the FK-51 is as good as the rest of the Funk stable (they do make beautiful planes) it’ll be one to watch. Funk also had a tailwheel version of its FK-9 on show, which looked very smart. *** Continuing my Germanic perambulations (I was trying to stay “in character” but have to admit that after a while Lederhosen does start to chafe) I stopped by the Flight Design stand. CEO Matthias Betsch was pleased to inform me that CTLS has its EASA (R)TC, allowing it to be used for flight training (in Europe; the LSA version can already be used this way in the USA). Also new from Flight Design was a CTsw fitted with a Rotax 914 Turbo, and a new main undercarriage. *** Evektor is expecting to receive its EASA (R)TC for the SportStar in about four weeks, while the EuroStar’s cockpit has a new luxury cockpit. A glider tug version powered by a Rotax 115-hp 914 Turbo is also available. *** On the Czech Sport Aircraft stand my fellow Brit’ Ben Fitzgerald-Connor delighted in confirming that the SportCruiser now has its EASA (R)TC. In Europe SportCruiser is known as the PS-28 Cruiser to differentiate the EASA certified version from the FAA LSA model. *** At a show the size of Aero it’s quite astonishing just how far you walk, so having restored my powers with some bratwurst and brotchen (and with the Leiderhosen now visibly snugger) I continued my Aryan ambulations. One aircraft that I very much liked the look of is the Phoenix Air motorglider. This very attractive aircraft features side-by-side seating, two wingspan options (one at 33 feet for cruising, the other being 49 feet for soaring) which can be changed in 60 seconds. Other great features include a feathering prop, fully de-riggable wings, speed-limiting (up to Vne) airbrakes, eight hours endurance and a 32:1 glide ratio. An electric version is also flying, powered by a 30kW electric motor (inset photo). *** More tomorrow!