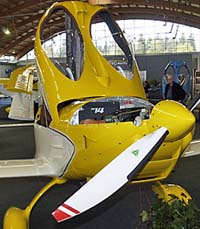 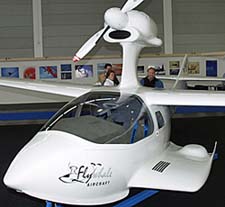 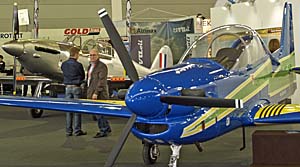 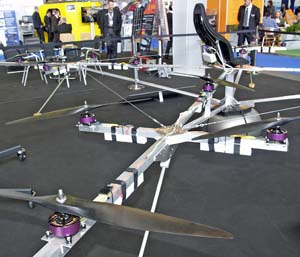 We begin coverage of the Aero 2012 event, brought to you each day that Dave’s Internet connection permits. All photos by Dave Unwin —DJ ||||

Celebrating its 20th Anniversary, Friedrichshafen Germany’s Aero show has grown in both size and popularity. Indeed, many feel it is easily the largest and most important general aviation show outside of North America. Unusually for most other GA shows, it also gives the style-conscious show-goer the unusual option of wearing Lederhosen. I must admit that as I read yet another doom-filled newspaper while waiting for my flight, I did wonder if perhaps this year’s event might be significantly smaller than it was in 2011. *** At first glance, I’d say that it was, although as I wandered around the display halls I was astonished at just how many new aircraft types were being displayed. I’ve always believed that recessions are often essentially “self-fulfilling” prophecies, generated mostly by negative coverage in the mass media. Judging by the amount of new aircraft, engines and avionics on show, I’d say that the GA market was definitely trying to stay positive! On the other hand though, the prolonged gestation period of anything related to aviation means that all of the engines and airframes would have been well advanced long before the economy stalled. Nevertheless, it was good to see so much stuff that I simply hadn’t seen before. *** Given my well-known predilection for aquatic aviation, I was pleased to see a significant amount of amphibious machines on display. An interesting looking machine was the FlyWhale. Designed by a German company, FlyWhale is an attractive looking amphibian which uses sponsons similar to the WWII Dorniers. It is powered by a Rotax engine mounted on a pylon aft of the cockpit. SeaMax was present, with one wing folded [a new feature], while Tecnam also had its amphibian on display, along with a good-looking tailwheel version of its popular P92. For the second year running, Peter Funk’s stunning Fk14 generated lot of interest; the LeMans version’s cockpit looks a bit like the original Batmobile! Another good-looking Italian airplane was the GoldenAvio F30, designed by one of the all-time greats, Stelio Frati. Powered by a Rotax 912, this very sexy machine certainly turned a few heads, as did the Millennium Master, Czech-built Shark, and Flying Legends scale versions of the Tucano and the Blackshape. *** As expected, quite a few pure electric aircraft were displayed and a real eye-catcher was the e-volo Volocopter VC1. This unusual arrangement of multiple electric motors claimed to be the world’s first manned vertical take-off by a purely electric aircraft in October 2011. As you can see from the picture, it has a great many motors! *** Pipistrel had a new version of its popular Sinus motorglider on show, which detachable wingtips. This reduces the span from 14.97m to 12.40. (We will ask Dave to search out the new Pipistrel Alpha and their sexy new Panthera four-seat project. —DJ) *** During the four-day show there is always a great number of very interesting press briefings and literally dozens of seminars, dealing with topics as disparate as licensing to light jets. However, although it’s always worth going to a press briefing, there are two obvious drawbacks: we’re all told only what the person giving the briefing wants us to hear and, of course, every other journalist in the room has the same story. Consequently, reporting for ByDanJohnson.com I will try to have a chat with a few company leaders, so that we can get the full story. *** One of the hottest topics at the show was, “Will EASA (ever) follow the FAA’s lead and introduce a Sport Pilot Licence and a Light Sport Aircraft category?” It appears to be a major bone of contention among European manufacturers that the majority of sales are their [originally] 992-pound European ultralight aircraft are in the U.S. as LSA category aircraft flying at 1,320 pounds max all-up weight. It is apparent to industry observers that not only does Europe want a Light Sport category… it also needs one! *** More tomorrow!