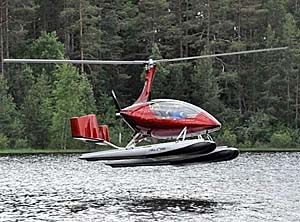 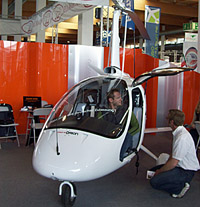 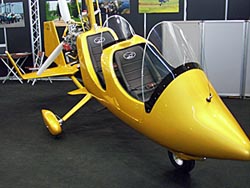 Handsome hardware, the Rotax 912 engine, and other refinements go beyond the Bensen Gyro.

Rotary wing aircraft have not been my focus. But I could hardly miss a flock of streamlined gyroplanes at Aero 2011 and I wondered why we don’t have these in the USA? To get an answer I went to Powered Sport Flying publisher and Internet radio producer, Roy Beisswenger, who covers the gyro scene in America… *** Roy explained, “While gyroplanes seem to be languishing in the USA, they are becoming a thriving part of the sport aviation market in Europe. The main reason focuses on the regulatory path in many European countries, which gyroplane manufacturers can follow to produce ready-to-fly ships. In contrast, the FAA specifically does not currently allow gyroplanes to be certified as Special LSA. Instead, U.S. manufacturers are required to offer either Part 27 aircraft (the rotorcraft equivalent of Part 23) or Experimental Amateur Built (EAB) kits. This has hampered the introduction of several fine designs from overseas because European manufacturers are forced to produce only partially-built gyros for the U.S. market, in essence dismantling a functioning aircraft design to squeeze into the EAB category. *** Few European manufacturers see the value of producing incomplete work and setting aside proven quality control processes to enter the U.S. market because they see a safety concern as well as an extra burden. After all, it takes a considerable commitment in time and money to produce builder instructions for steps normally accomplished in their own factories. *** The inability of American producers to manufacture ready-to-fly gyroplanes has also interfered with their businesses. Many pilots don’t have the desire, skills, or time to build their own gyroplanes. It is also difficult to get American designs accepted overseas where ‘ready-to-fly’ is the way the market and regulations are going. *** Meanwhile, in Europe, gyroplanes are being produced with enclosed cockpits, some with side-by-side seating. Fit and trim is equivalent to the fixed wing aircraft also being produced there. Another great feature is increased stability. The gyroplanes are pusher models, but they offer extended tail booms with large rudders and horizontal stabilizers. The powerplant of choice is the Rotax 912, again like most of the European light aircraft. *** Despite obstacles, some of the European gyroplane manufacturers are setting up American distributorships. Two of the biggest names being offered in the U.S. are Magni, an Italian brand, and AutoGyro, a German brand. U.S. Magni distributor Greg Gremminger has done a lot of work in recent years to educate the American market about the new generation of gyroplanes. His work is finally starting to pay off as the FAA takes another look at gyroplanes. *** FAA regulations offer a process for fully built SLSA gyroplanes to be produced and sold, but it is more difficult to accomplish for gyroplane producers than any other aircraft LSA type. The FAA is requiring a safety study of the category before they will commit to ASTM standards for the aircraft. Building and certifying a fleet of aircraft to study is something of a chicken-or-egg dilemma that is being worked out between government and industry. Someday Americans may also be offered the freedom to buy and fly a factory-built and certified SLSA gyroplane.”