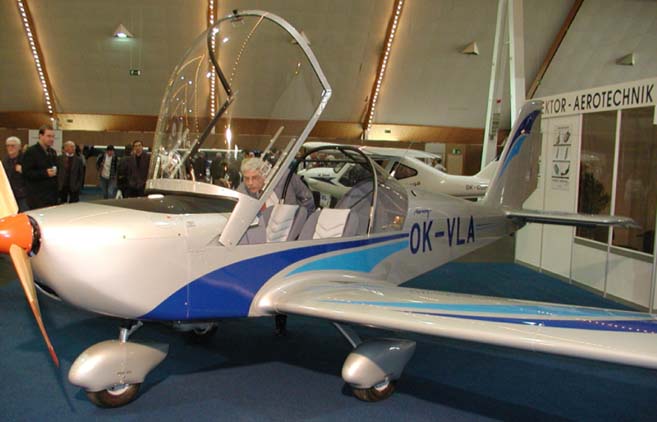 Marketed by Ikarus Comco, builder of the Cyclone seen
in the U.S., the low-wing Eurostar is built in the Czech Republic. 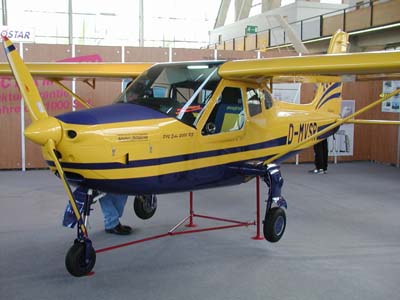 The P92 Golf was made retractable without altering the design much. 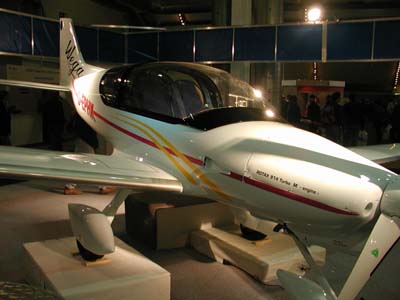 HK Aircraft produces the non-ultralight Wega 100 and is certifying it to the European JAR/VLA standards. 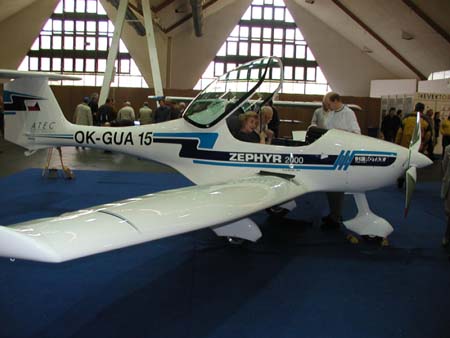 The Czech company ATEC produces the sharp Zephyr with a composite exterior but wood wings. 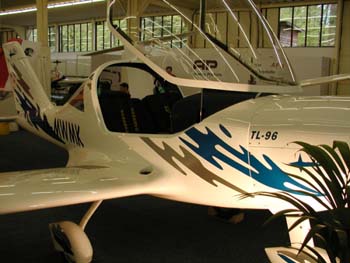 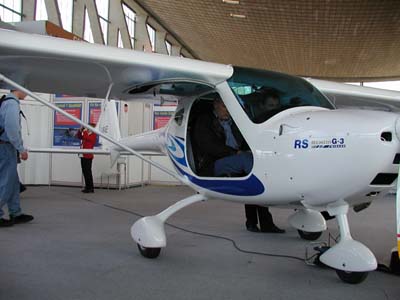 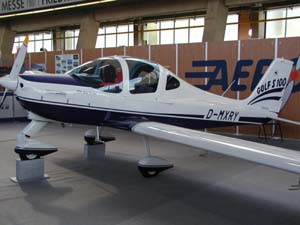 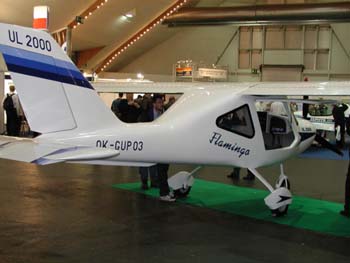 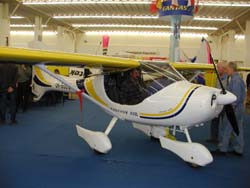 Light aircraft abound at Friedrichshafen’s air fair.
Once Oshkosh AirVenture has ended, you may be interested to hear of another gathering that challenges the Wisconsin affair for supremacy when it comes to light aviation. No, I’m not referring to Sun ’n Fun.
Inside the vast and numerous indoor halls of Aero 2001 in Friedrichshafen, Germany, the largest aircraft on display was a Cessna 206. But most were smaller, what the European Community calls ultralights, and the choices were as wide and diverse as the great halls that exhibited them.
An Air Fair, Indeed
When Germans speak English to Americans, they call their airshows “fairs.” Indeed, this July event was as large as some state fairs and resulted in near sensory overload for several U.S. airshow veterans who attended with me.
Aero, which alternates years like many European airshows, has been hosted by the southern German town of Friedrichshafen for the last decade. It will move to new quarters at the nearby airport for the 2003 event, but in this last year at the old site, no fewer than 10 large indoor halls or separate buildings were crammed to capacity with many beautiful light aircraft.
I attended for only two days, as I had previously planned a trip to the Ukraine. At the 2003 event, I won’t repeat this mistake. I’ll stay the whole time and will comb the offerings in much more detail. Based on a casual count, at least 50 gorgeous little airplanes were on display. The Czech Republic had its own hall with nearly a dozen aircraft companies exhibiting. Half of them I’d never seen, and all were worthy of a closer look.
Euro officials and pilots call their machines ultralights because that’s how the regulations describe them, the key factor being a maximum gross weight of 450 kilograms or 992 pounds. No upper speed limit is defined, so an increasing number of aircraft are striving to be speedy like some American kit-built designs.
The Euroland concept of an ultralight differs somewhat from what Americans call an ultralight. Theirs are light, much like American two-place ultralight trainers, but their mission profiles are closer to the fast-glass kits of the U.S. Imagine a half-weight Lancair and you’ll be close, though the speeds aren’t quite as high, and fuel consumption is much lower. European rules are scheduled for some change, and this may create a class of airplanes that can perfectly fit the new rule FAA has proposed (see below).
Most of the new machines are skinned with glass or metal. Designs continuing to use aluminum tubing and fabric are losing share to more modern shapes, though the remaining tube-and-rag types are much less costly. Once dominant trike sales are slowing rapidly.
In the majority of cases, the designs originate in western countries and are built in eastern countries, though some eastern European countries are now venturing out with their own marketing and sales systems. At least this is true for European sales. Most of the aircraft I photographed have yet to land North American representatives (with one exception being the Zephyr, distributed by Canada Czech Business Enterprises, 604/271-1169).
Light Sport Aircraft
FAA has been working on a new rule for years. They faltered badly with the recreational pilot license but have researched further and now propose a sport pilot license. (At press time, no announcement had been made.)
While everyone calls the proposed rule sport pilot, another part is called light sport aircraft (LSA), and it is this part of the rule that may cause some of these European aircraft to arrive on American shores. One entry showed at Oshkosh this year, the CT from Germany sold by Rollison Airplane Company (812/384-4972).
The proposed LSA rule specifies, among other things, that gross weight shall not exceed 1232 pounds. Even with the weight increase coming to Europeans, the chance to get in the huge U.S. market may cause many companies to alter their designs to fit this weight class. Certainly, it is close, at 560 kilos, to the 600-kilogram weight some are lobbying for in Europe.
The CT fits the weight easily enough, but the European version is a little fast, exceeding the LSA limit of 115 knots (132 mph) if fitted with the more powerful Rotax 912S and an efficient cruise prop. For U.S. consumption, Rollison fits the CT with a Warp Drive prop that my AirVenture tests show held the plane precisely to the FAA speed limit. I made opposing runs at maximum power in low-level flight and never saw more than 131 mph on the installed GPS.
With a new rule likely to emerge, experts say, snazzy aircraft from across the pond may have a dramatic impact on the American ultralight/light aircraft market. Many won’t succeed in the U.S., but several could. And while this is interesting to consumers, it may force some less successful Yankee ultralight and kit manufacturers out of business.
Home of the Zeppelin
The next Aero event will come during the year-long celebration of the 100th anniversary of powered flight. Friedrichshafen is in the south of Germany on beautiful Lake Constance (Bodenzee) across from Switzerland and near Austria. So beautiful are the surroundings that a view in any direction composes a postcard. And if you’re like me, fascinated with blimps, you may also want to visit the Zeppelin Museum, as the town is home to the famous airship brand.
Regardless of your particular aircraft focus, the lighter end of aviation has never been better served than at Aero. I highly encourage a visit, but planning ahead is essential to find accommodations. In some ways, that makes Aero a lot like the sprawling AirVenture operation. KP