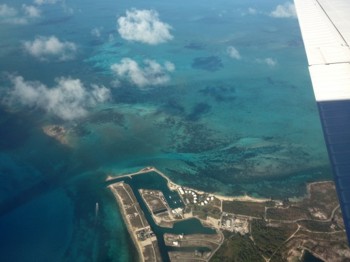 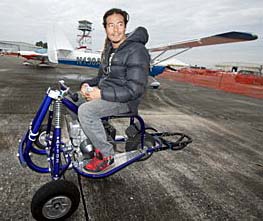 I don’t know what it’s called, but this cool custom rig was seen towing around a $100,000 LSA trike in handy fashion.,Welcome to Freeport, Grand Bahama!

Mort Crim, Mike Z and Jacob Peed about to mount up for the flight to the Bahamas. 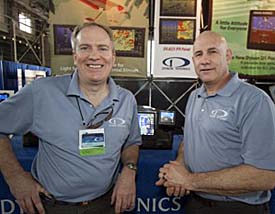 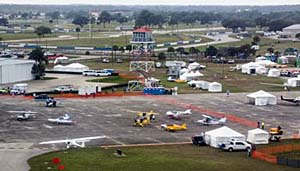 Goodbye Sebring, thanks for another great show! 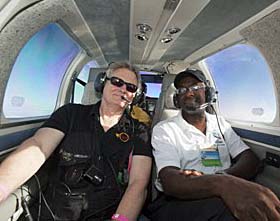 Yours truly (lt.) and Leonard Stuart of Bahamas Aviation en route to the beautiful Bahamas. 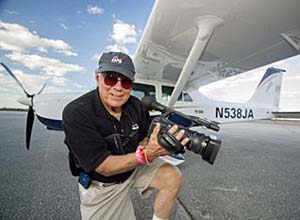 Mort Crim, former top journalist for the ABC News network, flew over in his Paradise P1 and is filming a video production on the event. 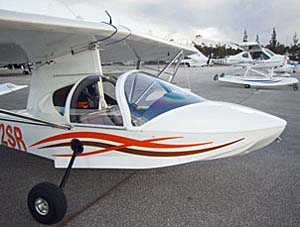 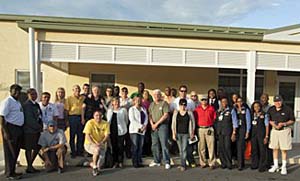 Our group and the friendly welcoming committee and staff at Freeport, Grand Bahama airport.

Sebring’s final day ended at 2 p.m. with lighter attendance typical of a Sunday and gathering clouds. I spoke with a couple of the principals of the Expo staff that did such a superb job making this no doubt the smoothest running, most feature-packed event that I’ve certainly been too. Kudos to all: it was a beautifully run event, from the many friendly, helpful volunteers to the new food vendors who upped the available comestible quotient (say that three times fast) with tasty food and good selection (Cheese Louise sandwich anyone? I had four! Buzzard Balls were also popular – it was a beef meatball kind of thing if you must know.)

The official end of show release claimed record attendance for the show so I won’t argue, though it did seem lighter than last year but it’s easy to underestimate. More importantly, many vendors were actually pleased with their results with sales or solid leads from the LSA-focused crowd.

Weather could have been better throughout, but there were many demo flights the last day, where wind and rain had challenged exhibitors to properly and thoroughly show off their aircraft.

The get away to the Bahamas got away, under some duress from weather and last minute briefing missings, along with a few cancellations. The group, including a Baron that my wife and I flew over in (alas, an LSA for me and she was not to be in the cards), punched off starting at 2 p.m. for the 154 nm flight to Freeport, Grand Bahama, where we were greeted by warm, friendly faces and whisked away after a rum punch and sandwich reception at the airport, led by Leo Douglass II of the Grand Bahama Airport Company and Donna Mackey of the Bahamas Ministry of Tourism & Aviation.

Much more on this wonderful trip later, as we’re flying to Bimini in a gaggle in a couple hours and there’s still a refreshing morning swim to be had at the Grand Lucayan hotel’s amazing serpentine pool – 600 ft long but seems even longer! – and a buffet breakfast, included in the special discounted-for-pilots rate at the hotel with the best cup of coffee, easily, I’ve had in years.

Just a teaser first: The four-day LSA trip organized by Mike Zidziunas of Breezer Aircraft (Mike Z is the most excellent LSA Ambassador to the islands, mon) and Jacob Peed of Aviator’s Hotline (Grand Bahama and Bimini) at 2 pm proved to be a real challenge to launch for various reasons having nothing to do with the planning and everything to do with mild anxiety over gathering clouds to seaward and some folks who missed the essential pilot’s briefing.

Not to be deterred, and armed with a most excellent weather prognosis from Chris Parker, a friend of Mike Z.’s, we arrived over Freeport with sunny skies and breathtaking views of light-aqua-banded waters and an 11,500 foot runway – long enough for the most errant of LSA pilots.

And now for the rest of the Sebring story, in pictures, with manifest thanks to Jana Filip and her hard working crew. This is probably going to be a two-part finale as I’m running out of time before we fly.