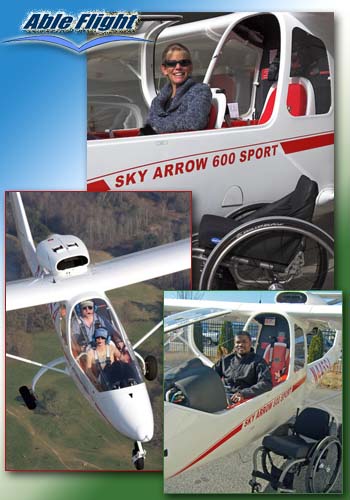 Very Able — Able Flight has put broad smiles on some young faces by giving scholarships to students with disabilities so they can learn to fly. Above are featured some of Able Flight’s success stories. Learn more about scholarships.

How can you do good for aviation and for a fellow American who wants to fly but has challenges? One organization shows the way. By any measure, Able Flight is doing good by enlarging the number of folks who learn to fly. That they do one better by helping people with disabilities learn to fly makes this a sure winner. If you agree, you can help with a donation. *** Able Flight says their mission is to offer people with disabilities a unique way to challenge themselves through flight training, and by doing so, to gain greater self-confidence and self-reliance. I would hasten to add Able Flight also adds to the pilot population… nearly all aviators see this as a good thing. Yet becoming a pilot is only one way people can enter aviation to its benefit. *** “With Able Flight’s new Career Training Scholarship, it is now possible for a person with a physical disability to earn an FAA-issued Repairman Certificate for Light Sport Aircraft in only three weeks, and use that certificate to work at an existing maintenance facility or become an entrepreneur and create their own business,” stated Charles Stites, Executive Director. “From the time Able Flight was founded, we’ve been looking for opportunities to help people with disabilities find a career in aviation, a career that will allow them to become self-sufficient,” explained Stites. “Our new Career Training Scholarship is an outstanding way to make that possible. A Repairman Certificate with a Maintenance rating (LSR-M, or Light-Sport Repairman able to do Maintenance) allows a person to have a very rewarding career working with Light Sport Aircraft.”